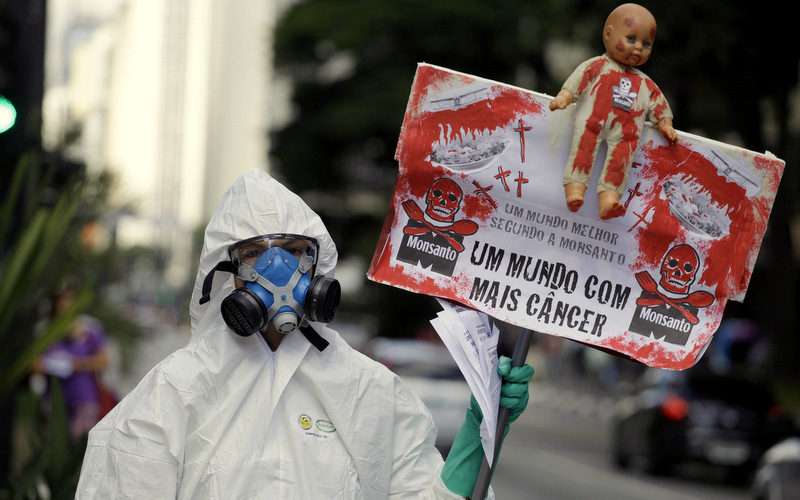 A protester wearing a protective suit and mask holds up a sign toward passing cars that reads in Portuguese «A better world according to Monsanto is a world with more cancer» in Sao Paulo, Brazil, Saturday, May 25, 2013. (AP/Nelson Antoine)

German pharmaceutical and agrochemical company Bayer has finally succeeded in its attempts to buy US GM seed company Monsanto. The merger will create a company that commands more than 25% of the world’s agricultural market for seeds and pesticides.

Bayer first attempted to buy Monsanto for $62 billion this past May but was unsuccessful as Monsanto demanded more money following its failed takeover of the world’s largest GM seed company Syngenta. Antitrust authorities in the US and the EU still have the ability to prevent the merger, the possibility of which has kept Monsanto’s real value well below Bayer’s offer of $128 per share. Due to the complexity of antitrust approvals, the actual merger will likely not take place until 2017.

Bayer acquired the $66 billion via financing from a consortium of banks including Goldman Sachs, HSBC, JP Morgan, and Bank of America. Interestingly, Forbes reported that the Rothschild group, a name well-known to many in alternative media, served as an advisor to Bayer during its negotiations with Monsanto.

Despite all of the controversy that has surrounded Monsanto in recent years, Bayer has an even darker past. Bayer first patented product, which put them on the map, was heroin, which they marketed worldwide to children for decades as a cough medicine for children free of side effects despite its well-known dangers of addiction. Bayer established themselves as the dominant pharmaceutical company in Europe after trademarking aspirin a year later. However, Bayer’s most nefarious deeds involved the manufacture of chemical weapons, including the invention of chlorine gas in World War I and its founding of a “School for Chemical Warfare.”

Following the war, Bayer merged with other German chemical companies to form the conglomerate IG Farben. IG Farben was the single largest donor to Hitler’s election campaign and profited handsomely from the rise of Nazi Germany. IG Farben produced all of Nazi Germany’s explosives and used more than 83,000 forced laborers and concentration camp inmates in its factories. They also financed torturein concentration camps manufactured the infamous Zyklon B, a cyanide-based pesticide that claimed the lives of over a million people in the gas chambers of Auschwitz and Majdanek. Bayer has sinceresumed production of Zyklon B. However, only 13 employees of IG Farben were punished after the war with sentences “light enough to please a chicken thief” according to Nuremberg prosecutors. When the war ended, IG Farben was again broken up into its subsidiaries and Bayer once again became its own company.

Now, Bayer’s dark legacy will merge with that of Monsanto. Monsanto has been the subject of ire for over a decades, most recently following international studies and revelations of the carcinogenic nature of their best-selling pesticide Round-Up, also known as glyphosate. Monsanto, in the past, helped contribute to atomic bomb research and created Agent Orange which was used to deforest large sections of Vietnam during the US invasion. Agent Orange caused half a million Vietnamese children to be born with deformities and contaminated over 3 million people. Monsanto currently still markets Agent Orange as a pesticide for GM corn in the US.

Together, Bayer and Monsanto will form arguably one of the most malevolent corporations ever to exist. However, the Bayer takeover of Monsanto is only one of several recent mergers that, following a successful Bayer-Monsanto merger, will have consolidated the majority of the world’s largest Agrochemical and GM seed companies into only three massive corporations. Syngenta, the largest GM seed companyrecently merged with ChemChina and DuPont chemical is expected to merge with Dow Chemical Co next year. Perhaps, one day, all three will merge into one gigantic conglomerate that poisons our food and our environment.

This work by TrueActivist is licensed under a Creative Commons Attribution-NonCommercial-ShareAlike 4.0 International License.