Blame the Federal Reserve, Not China, For Stock Market Crash 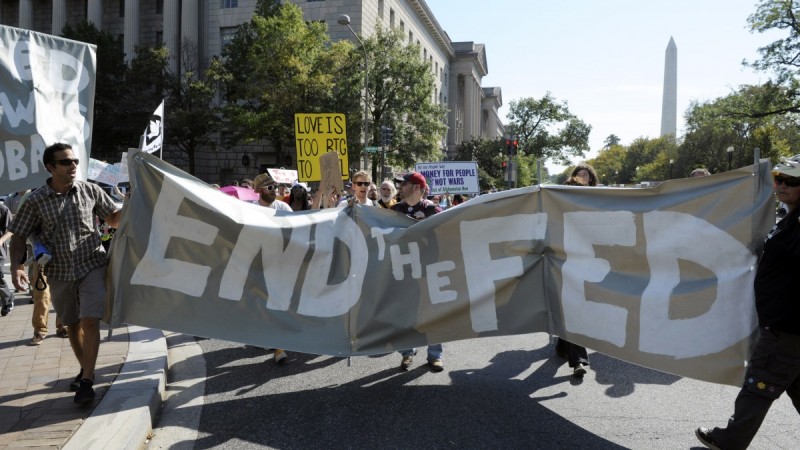 With the Washington Monument behind them, protesters cal for the end of the Federal Reserve, Sunday, Oct. 9, 2011. (AP Photo/Cliff Owen)

Analysis– Following Monday’s historic stock market downturn, many politicians and so-called economic experts rushed to the microphones to explain why the market crashed and to propose «solutions” to our economic woes. Not surprisingly, most of those commenting not only failed to give the right answers, they failed to ask the right questions.

Many blamed the crash on China’s recent currency devaluation. It is true that the crash was caused by a flawed monetary policy. However, the fault lies not with China’s central bank but with the US Federal Reserve. The Federal Reserve’s inflationary policies distort the economy, creating bubbles, which in turn create a booming stock market and the illusion of widespread prosperity. Inevitably, the bubble bursts, the market crashes, and the economy sinks into a recession.

An increasing number of politicians have acknowledged the flaws in our monetary system. Unfortunately, some members of Congress think the solution is to force the Fed to follow a “rules-based” monetary policy. Forcing the Fed to “follow a rule” does not change the fact that giving a secretive central bank the power to set interest rates is a recipe for economic chaos. Interest rates are the price of money, and, like all prices, they should be set by the market, not by a central bank and certainly not by Congress.

Instead of trying to “fix” the Federal Reserve, Congress should start restoring a free-market monetary system. The first step is to pass the Audit the Fed legislation so the people can finally learn the full truth about the Fed. Congress should also pass legislation ensuring individuals can use alternative currencies free of government harassment.

Of course, Congress and the Fed are unlikely to “just stand there” if the economy further deteriorates. There have already been reports that the Fed will use last week’s crash as an excuse to once again delay raising interest rates. Increased spending and money creation may temporally boost the economy, but eventually they will lead to a collapse in the dollar’s value and an economic crisis more severe than the Great Depression.

Ironically, considering how popular China-bashing has become, China’s large purchase of US Treasury notes has helped the US postpone the day of reckoning. The main reason countries like China are eager to help finance our debt is the dollar’s world reserve currency status. However, there are signs that concerns over the US government’s fiscal irresponsibility and resentment of our foreign policy will cause another currency (or currencies) to replace the dollar as the world reserve currency. If this occurs, the US will face a major dollar crisis.

Congress will not adopt sensible economic policies until the people demand it. Unfortunately, while an ever-increasing number of Americans are embracing Austrian economics, too many Americans still believe they must sacrifice their liberties in order to obtain economic and personal security. This is why many are embracing a charismatic crony capitalist who is peddling a snake oil composed of protectionism, nationalism, and authoritarianism.

Eventually the United States will have to abandon the warfare state, the welfare state, and the fiat money system that fuels leviathan’s growth. Hopefully the change will happen because the ideas of liberty have triumphed, not because a major economic crisis leaves the government with no other choice.

Copyright © 2015 by RonPaul Institute. Permission to reprint in whole or in part is gladly granted, provided full credit and a live link are given.
Comments
septiembre 1st, 2015