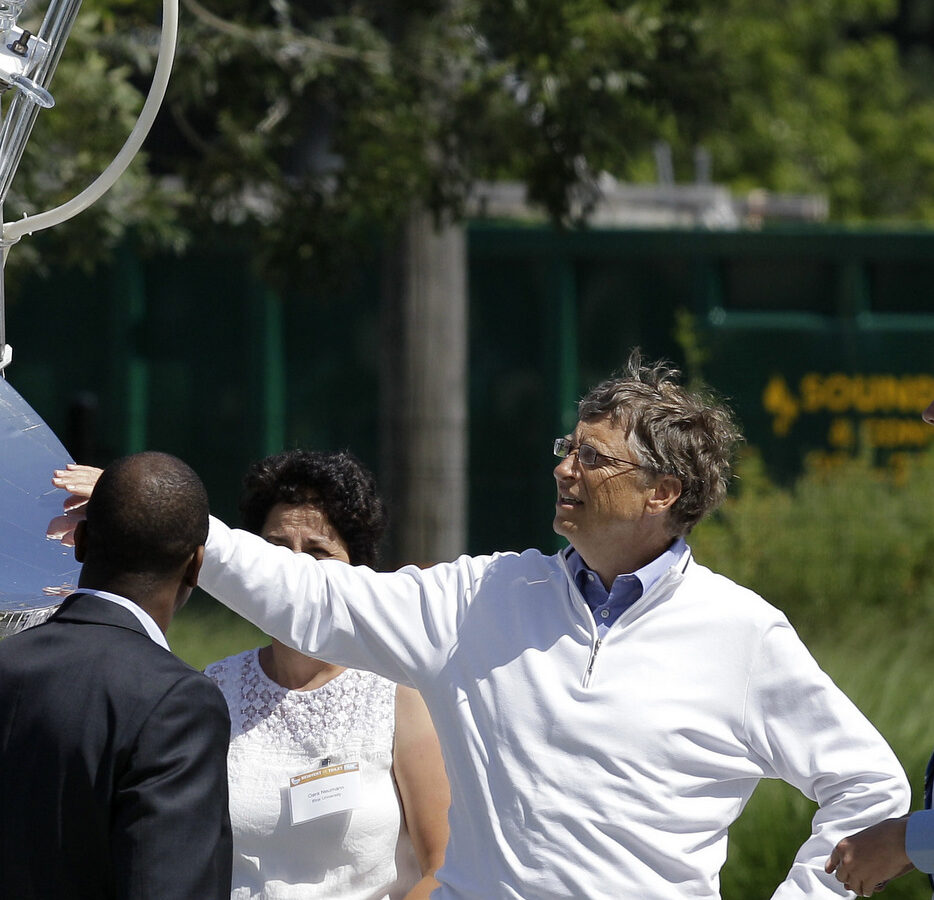 “[A] clear benefit of the project is to spur companies to put in place such policies more quickly, because many won’t like to be found at the bottom of the rankings,” a founder of the initiative tells MintPress.

Bill Gates, right, looks at a device that uses solar energy to treat human waste, as he tours the «Reinventing the Toliet» Fair, Tuesday, Aug. 14, 2012, in Seattle, which is part of a Bill &amp; Melinda Gates Foundation competition to reinvent the toilet for the 2.6 billion people around the world who don’t have access to modern sanitation.  Photo: Ted S. Warren/AP

The Corporate Human Rights Benchmark will aim to build on and guide new global momentum around the human rights obligations of multinational companies. While related discussions have been taking place for decades, supporters say there is today significant new acknowledgment of and energy around the issue – from the multilateral through grassroots levels, from executive boardrooms to government offices, and from asset managers to consumers.

“There is definitely growing awareness of human rights issues as they pertain to the broader business community,” Stephen Hine, the head of responsible investment development at EIRIS, a British research service for responsible investors and a founder of the new benchmarking initiative, told MintPress News.

“Certain industries, such as extractives, have been under pressure on this issue for some time and have begun systematically addressing human rights issues. But this is now expanding.”

Much of this energy was formalized and strengthened in 2011, when the United Nations Human Rights Council unanimously endorsed landmark guidelines called the Guiding Principles on Business and Human Rights. This framework not only formally acknowledges that multinational companies have responsibilities toward international rights norms, but also lays out detailed obligations by which governments need to ensure accountability.

Nearly four years later, many advocates say that enough time has passed to start to mark progress on adherence to the Guiding Principles, and to differentiate companies’ varying actions. Yet the new benchmarking initiative will also aim to make available an actionable outline for managers and executives, offering common metrics by which to gauge and discuss their own policies.

“What the [benchmarking] will help is in creating a framework within which companies can work and others can assess how well human rights are being managed by companies in a narrower sense, in ways that can become more immediately practical,” Hine said.

“Those companies that already are doing quite a lot in this regard will be better able to respond, while others may be that much more nervous if they don’t yet have strong policies in place yet. That’s not a bad thing, of course.”

Indeed, a commonly voiced goal among the new project’s organizers is to create a “race to the top” among companies keen not to be singled out for public opprobrium.

“There is a bit of a challenge for a number of corporations for which this is a relatively new issue,” Hine noted. “But a clear benefit of the project is to spur companies to put in place such policies more quickly, because many won’t like to be found at the bottom of the rankings.”

The benchmarking project is being spearheaded primarily by investment groups, particularly those with strong socially and environmentally conscious reputations. Three of the six founding members are institutional investors, Aviva, Calvert and VBDO. In addition to EIRIS, the initiative’s other founders are two British watchdog groups that focus on business and human rights.

Observers say investors are becoming increasingly active in pushing corporate leaders to specify how they are planning to adhere to a range of rights issues throughout their global operations. Well-known brands, in particular, are becoming more and more susceptible to public knowledge about — and reaction to — weak corporate policies, both domestically and abroad.

A range of major U.S. and European retailers, for instance, were buffeted by public frustration over the past two years in the wake of two major industrial disasters in the Bangladeshi apparel sector. These catastrophes, both in Dhaka-area facilities, were linked to shoddy oversight of factory infrastructure as well as a more complex mix of weak labor standards.

In retrospect, major retailers and manufacturers were forced to acknowledge that they could and should have engaged more stringently in oversight of their suppliers. Many consumers agreed and, in an attempt to force substantive negotiations, some undertook boycotts of the products of what were seen as offending companies.

“Human rights issues are of material concern to shareholders, consumers and increasingly to regulators. From human trafficking in agricultural supply chains to labor conditions in factories around the world, increased attention is being paid to how a company does its business, including how it minimizes negative impacts on human rights,” Amol Mehra, director of the International Corporate Accountability Roundtable, a Washington-based network that supports but is not affiliated with the new benchmarking project, told MintPress.

“By creating meaningful benchmarks and rankings, stakeholders will have the power to invest, shop and support their values. Further, a powerful race to the top will help set the leaders apart from the laggards and create a business environment where respect for human rights is a core differential advantage.”

Despite this widespread growth in interest, it is unclear the extent to which national governments will get involved with the benchmarking initiative. In mid-December, the British government announced that it would be offering significant financial support for the project, which the Dutch government is also backing.

Since then, the British business minister, Jo Swinson, has repeatedly called on other countries “join us” in supporting the project, which she says will be an “invaluable resource to protect the rights of vulnerable people in the UK and around the world.” But other countries, including the United States, have not publicly taken up this offer. Still, EIRIS’s Hine says he expects additional government support will eventually be forthcoming.

There is precedent for this type of approach, a ranking of corporations to prompt change. For instance, international development experts point to positive results from the Access to Medicine Index, a Gates Foundation-funded initiative that rates the 20 largest drugs producers around issues of pricing and availability of life-saving pharmaceuticals in poor countries.

Since the index began publishing in 2008, its organizers say major drugs companies have increasingly taken into account socioeconomic factors in their pricing strategies.

In addition, “more companies are applying pricing schemes within countries, targeting different segments of the population with different prices,” the index’s website reports. “The number of companies engaged in such segmentation has grown substantially over successive Indices, from five companies in 2010, to 12 in 2012, to 16 in 2014.”

Other global corporate rankings systems have looked into access to nutrition, the use of so-called “conflict minerals” in consumer electronics, or corporate commitment to deforestation-free supply chains, among many other issues. Watchdog groups say that such benchmarking initiatives help interested companies know how to improve in certain areas, help investors know which companies are doing better or worse in those areas, and help advocates shepherd consumer spending towards specific aims.

For many, human rights issues, particularly in the global context, are at once among the most visceral and most complex of social concerns, highly vulnerable to manipulation and obfuscation. Proactive corporate policies can include commitments to, for instance, fair wages and labor rights, adequate and safe working conditions, gender uplift and the banning of human trafficking or slavery.

Yet such progressive policies can sit alongside weak or nonexistent stances on, for instance, whether a company’s global suppliers, subsidiaries or even investments adhere to the same standards. Often still more complicated is how far companies are willing to go to facilitate the reporting of complaints or to rectify any such problems that do arise.

While many of these concerns will likely be taken into account by the new Corporate Human Rights Benchmark, its exact scope has not yet been defined. Following the project’s announcement, in December, the initiative’s six founding organizations will take much of the coming year to engage in global discussions on metrics and methodology.

After this year’s outreach to companies, investors, civil society and other stakeholders, researchers will take on around 200 companies on a pilot basis. These will be selected from among the largest and most dynamic actors in four sectors — extractives, agriculture, apparel and modern electronics — though this number could be expanded in future.

Organizers say the benchmark will eventually take into account companies’ human rights-related policies and mechanisms, as well as their overall performance. Some supporters of the new project are now keen that the latter is given significant weight over the former.

“To be effective, [the benchmark] has to be based on companies’ actual impacts, not merely their policies and processes,” Peter Frankental, the director of the economic relations program for Amnesty International UK, told MintPress.

“Otherwise, it will legitimize companies that have plausible policy statements and processes on paper, while continuing to abuse human rights on the ground where they operate.”

The Corporate Human Rights Benchmark is currently slated to release an initial formal ranking of some 300 companies by next year. That number will be increased to 500 by 2017.