As Iraqi Civilians Die In The Mountains, US Weighs Airstrikes 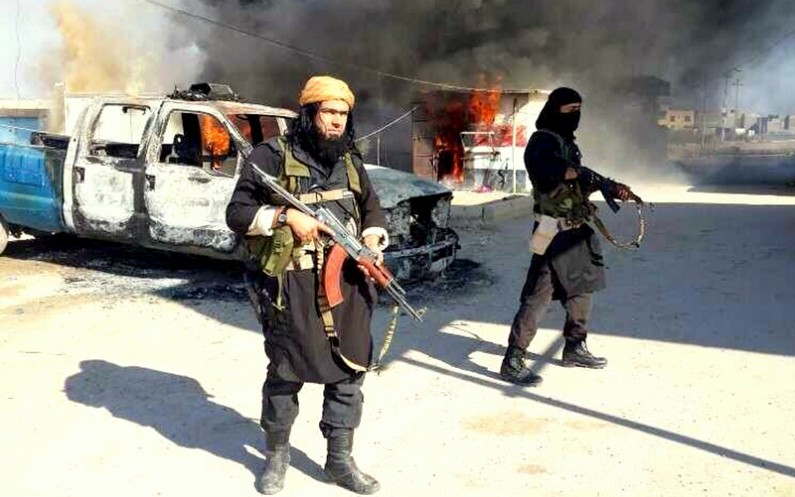 Shakir Waheib, a senior member of Islamic State of Iraq and the Levant (ISIL), left, next to a burning police vehicle in Iraq’s Anbar Province.

President Obama is considering airstrikes targeting Islamic State of Iraq and Syria (ISIS) militants in response to a humanitarian crisis that has forced as many as 40,000 Yezidi and Christian minorities in Iraq to face dehydration and exposure on a mountaintop where they fled to escape violence, the New York Times reported Thursday.

In addition to this more «active» option, an administration official told the Times that Obama was also weighing a «passive» option of airdrops of food and medicine.

Tens of thousands of Iraqis are stranded on the mountains surrounding Sinjar city, which ISIS overtook Sunday. At least 40 children are reported to have died due to thirst and lack of shelter, as the refugees struggle to survive without drinking water, food, and basic services. What little aid has been able to get through is not nearly enough for the estimated 40,000 civilians who are trapped, scared to go anywhere lest they be captured and killed.

«These children from the Yazidi minority died as a direct consequence of violence, displacement and dehydration over the past two days,» said UNICEF representative Marzio Babille.

Thousands of residents of the Christian city of Qaraqosh fled Thursday after ISIS (also known as ISIL) arrived overnight, while others told Amnesty International that they were trapped in the town and unable to leave.

“The situation for Iraqis in the north-west of the country, especially those from the Yezidi and Christian minority communities, is becoming increasingly dire as both residents and many of those already displaced are now fleeing their homes and places of shelter,” said Donatella Rovera, Amnesty International’s Senior Crisis Response Adviser, who is currently in northern Iraq. «They are gripped by panic and fear.»

In a statement, the Deputy Special Representative of the United Nations Secretary-General for Iraq,  Gyorgy Busztin, said:

I am gravely concerned for the physical safety of many of those civilians trapped in areas under ISIL control or in areas affected by violence.  The UN continues to receive reports that members of minority communities are being subjected to serious human rights violations by ISIL including murder, kidnappings, forced conversions, physical and sexual assault, and the looting and destruction of property and places of religious and cultural significance, in what appears to be a widespread and systematic policy aimed at cleansing non Sunni ethnic and religious communities from areas under its control.

In the Guardian, the Chaldean archbishop of Kirkuk, Joseph Thomas, described the situation in northern Iraq as «catastrophic, a crisis beyond imagination.»

The UN reports that over the last 48 hours 200,000 civilians have fled the advance of ISIS, with at least 180,000 crossing into the Dohuk district of Kurdistan. Many are heading toward Erbil, the seat of the semi-autonomous Kurdish region. On Thursday, the Kurds asked for help from the international community in dealing with the influx of refugees.

Thus far, the U.S. has been helping the Iraqi government coordinate air drops of vital supplies, but has not intervened directly. But according to the Times, «administration officials said on Thursday that the crisis on Mount Sinjar may be forcing their hand.»

This article was originally published on Common Dreams.