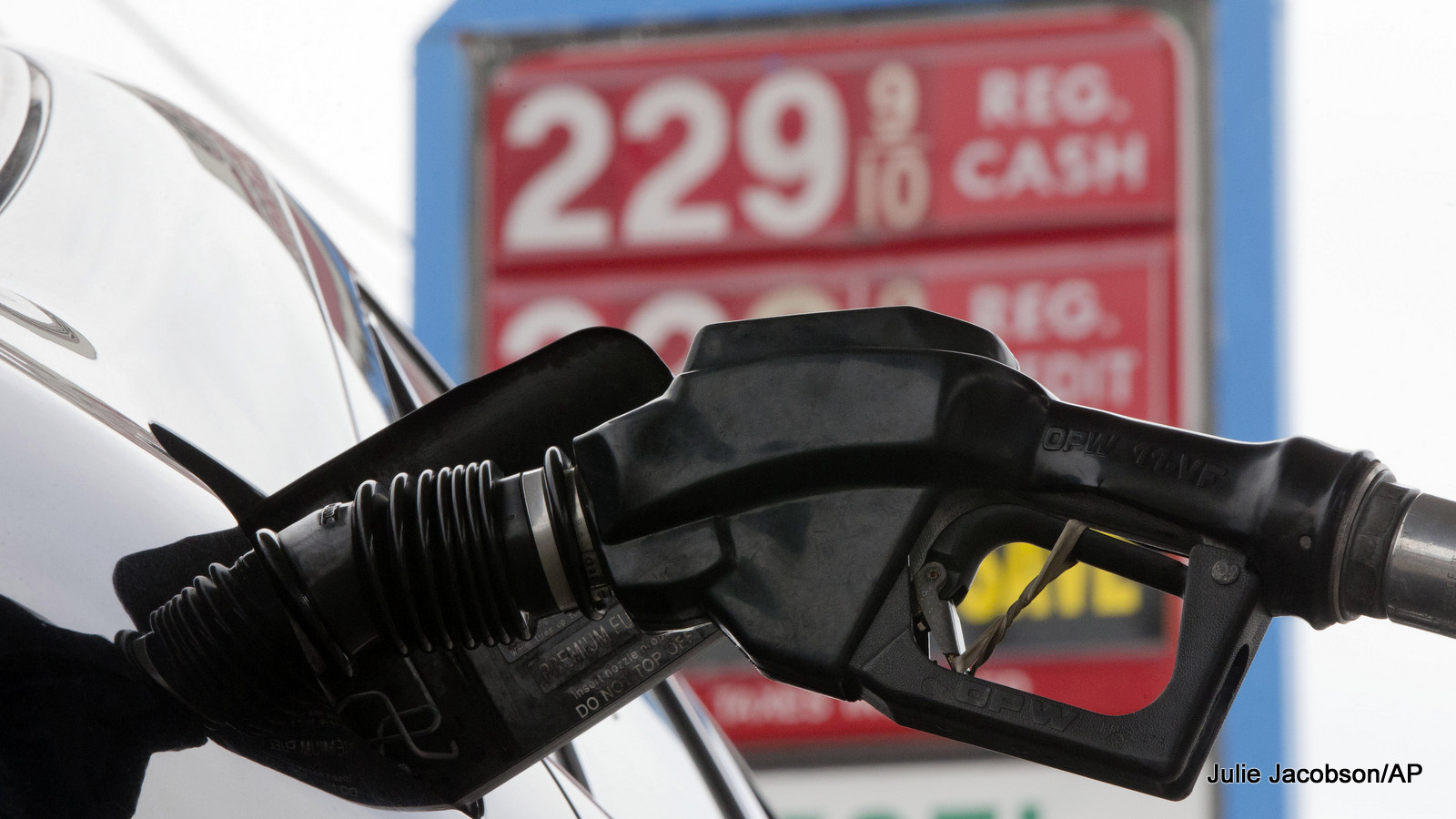 If the federal gas tax had kept pace with inflation since 1993, it would be double what it is today. Could the dysfunctional spending debate that has stalled raising this tax for over two decades finally be coming to an end?

Gas is pumped into a car at the Eastcoast filling station Thursday, Dec. 18, 2014, in Pennsauken N.J.  Photo:Matt Rourke/AP

WASHINGTON — Sensing mounting momentum on the issue, “smart growth” advocates, elected officials and others are pushing President Barack Obama to indicate his support for an increase in the federal tax on gasoline in his State of the Union speech next week.

Raising the gas tax has been politically unviable for decades, and the current levels have remained untouched since 1993. Yet this stranding has gummed up the federal system set up to maintain the country’s vast federal network of roads, highways, bridges and other transport infrastructure.

The mechanism that is supposed to finance this work, the Highway Trust Fund, is once again slated to expire by May, and is already some $100 billion in the red. Last year, government analysts estimated that an increase in the gas tax of some 10 to 15 cents was needed to cover this shortfall in the medium term.

At the time that estimate came out, the issue was a nonstarter. Yet today there is, suddenly, a growing convergence of interest in raising the federal gas tax. Lawmakers and analysts from across the political spectrum are discussing the issue with relative openness, and the gas tax has become a surprise leading point of discussion and debate during the opening days of the new Congress.

This has included new openness from such key figures as Sen. James Inhofe, R-Okla., the influential new chair of the Senate’s Environment and Public Works Panel. On Wednesday, Inhofe told reporters that “everything is on the table” for his panel’s new agenda.

Other Senate conservatives supporting a revisiting of the gas tax include John Thune, R-S.D., Orrin Hatch, R-Utah, and Bob Corker, R-Tenn. The latter put forward a bill last year to raise this rate by 12 cents over two years, and the proposal could now be reintroduced in the new congressional session.

Even Rep. John Boehner, R-Ohio, the speaker of the House of Representatives, last week walked back earlier comments on the issue. While the politics remain difficult, he said, funding the Highway Trust Fund would be a key priority in the coming months.

The reason behind this new discussion is simple: oil prices have been cut in half over just the past half-year. On Wednesday, a leading indicator showed oil trading at just over $46 a barrel, down from $110 in June. As a result, Americans are paying massively lower prices for both gasoline and diesel. For longtime proponents of raising the gas tax, that means a singular political opportunity to rebalance a system that has been increasingly out of alignment for years.

President Obama has yet to weigh in on the issue. In the past, the White House has not supported raising the gas tax, proposing instead to refill the Highway Trust Fund by closing loopholes in the U.S. corporate tax code. Given the new momentum on the issue, however, advocates are hoping the White House will change its stance.

“The steep drop in gas prices offers the best opportunity in years to raise the revenue we need to rescue our transportation trust fund and build for the future,” states a new petition from Transportation for America, a coalition of political, business and community leaders.

“[T]he President must use the Jan. 20 [State of the Union] address to say how he would pay for the investments he knows are needed. Now, while consumers will feel the impact the least, is the best time to act for a near-term fix. The President can either stifle the conversation from the outset, or add his voice to the growing chorus.”

Since 1993, the federal tax on gasoline has stood at a little over 18 cents per gallon. For diesel, this number has been fixed at a bit over 24 cents. Yet if these figures had kept up with inflation, they would be nearly double this level by today – around 30 cents per gallon for gasoline.

The gas tax is a paradigmatic example of the dysfunction that has marked the U.S. spending debate in recent years. Economists and most lawmakers readily understand the need for regular, inflation-linked increases in U.S. fuel excise taxes. Yet the politics of the issue have consistently overwhelmed any broad public recognition of this fact.

The direct result of these massively shrinking budgets has been a steady deterioration of the sprawling U.S. highways system – one of the largest infrastructure projects in the world, and one that is constantly being winnowed away by the elements. Every year, for instance, the American Society of Civil Engineers (ASCE) issues a “report card” on U.S. infrastructure, and recent ratings have been consistently dismal.

In its 2013 report, the most recently released, the ASCE gave U.S. infrastructure an overall rating of D+, and warned that investment worth some $3.6 trillion was needed by the end of this decade. Transit overall received a D, as did roads, while bridges received a C+.

Of course, there is much more to U.S. infrastructure funding than the stalemate at the federal level. States have tremendous responsibilities for the upkeep of their own transportation systems, and much of this funding is likewise linked to state-level taxes on gasoline.

Here, too, the politics of raising those taxes has been difficult. Yet unlike the federal government, states often can’t run year-to-year deficits, thus forcing lawmakers to either meet this issue head-on or dramatically cut other services.

“Utah has gone almost 18 years without an increase in its gas tax, so instead they’ve increasingly spent money from their General Fund on transportation – spending less on education and human services,” Carl Davis, a senior analyst at the Institute on Taxation and Economic Policy (ITEP), told MintPress News.

Yet Davis notes that thinking in many states has started to change in recent years, moving toward both raising and restructuring gasoline taxes.

“The states aren’t looking at raising taxes because gas prices are low, but rather because we have a huge backlog of infrastructure projects that need to be dealt with,” he said.

“That’s been going on – and discussed, at both the state and federal levels – for a number of years. Now that gas prices are a bit lower, that helps reduce the biggest obstacle, that drivers just don’t want to pay more for gas. But in fact, taxes are such a small component of what consumers are actually paying for.”

Increasingly, states are not only raising their flat taxes on gas but also reworking them so they will increase on their own over time. Following changes over the past two years, most Americans now live in a state with what’s known as a variable-rate tax. And, Davis says, that trend will likely continue.

Of course, it is not only policymakers in the United States that are trying to figure out whether falling oil prices free them up to change longstanding fossil fuel policy.

Petroleum products continue to play an underpinning role in almost every country’s economy, directly affecting, for instance, food prices and other daily necessities for the rich and the poor. For this reason, countries around the world have traditionally offered a variety of policy measures aimed at reducing fuel costs, hoping for a knock-on effect throughout the rest of their economy, as well as a bit of political boost.

According to a recent report from Worldwatch, a Washington think tank, tax breaks, incentives, and various other consumption and production subsidies for the fossil fuel industry are likely nearing $2 trillion each year, amounting to 2.5 percent of total gross domestic product for 2012. Further, after a dip in the immediate aftermath of the global financial recession, these figures have risen again in recent years.

On Tuesday, the World Bank released a semi-annual report on the global economy, in which it noted that the current low oil prices “offer a window of opportunity to implement subsidy and energy tax reforms in oil-importing countries.” Doing so, the bank noted, could free up funding “for better-targeted pro-poor spending or investment. At the same time, such reforms would reduce distortions that tilt economies towards energy-intensive activities.”

Similar trade-offs are being made here in the United States. On Tuesday, more than a dozen civil society groups released a new tool aimed at highlighting the increased social spending that could result from a decrease in or elimination of the roughly $13.5 billion in subsidies offered to the fossil fuel industry each year in this country. (The industry disputes that these measures constitute subsidies.)

For instance, the amount of money the government spends on research programs that feed into the fossil fuel industry are equivalent to the medical care offered each year to nearly 193,000 war veterans. Likewise, a drilling tax break worth $656 million each year could instead be used on food assistance for more than five million low-income people.

“We’re constantly being told that there’s no money left, that the country is going broke,” Lukas Ross, a climate and energy campaigner with Friends of the Earth, an advocacy group that was involved in developing the new site, told MintPress. “We wanted to show that there is money for essential programs that people actually like, if we just exercise a bit more common sense and political direction.”