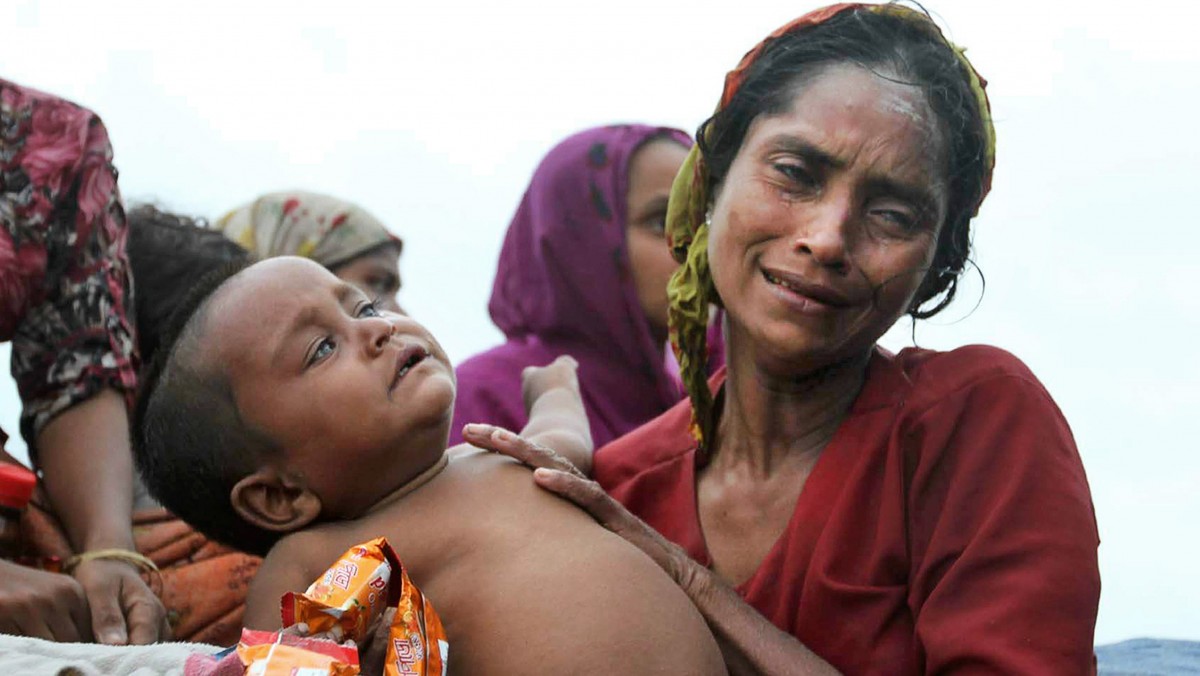 A Rohingya Muslim woman who fled Myanmar to Bangladesh to escape religious violence, sits with her baby in a boat after being intercepted crossing the Naf River by Bangladesh border authorities in Taknaf, Bangladesh, Wednesday, June 13, 2012. (AP Photo/Anurup Titu)

BANGKOK — Decades of dictatorship in Myanmar produced a deep catalogue of casualties: slain dissidents, land mine victims and economic ruin, to name a few.

For instance: Maybe Myanmar has the population of South Korea. Maybe its population rivals that of France. Both estimates of Myanmar’s population — ranging from 48 to 65 million — are commonly cited.

No one knows for sure.

In late March, Myanmar will launch its first census in more than three decades.

The project is designed to collect basic facts inside a nation shrouded in mystery. It’s being touted as a vital unifying, nation-building exercise. “Let us build a new Myanmar together,” reads a pamphlet promoting the census, which the government is undertaking with United Nations backing.

But Myanmar’s Muslims and outside human rights groups are sounding an unconventional warning. They contend that data on religion will reveal a potentially dangerous truth: Myanmar’s Muslims are much more plentiful than the old military regime ever admitted.

Given waves of anti-Muslim violence and a pervasive suspicion of Muslim groups in Myanmar — even from politicians celebrated in the West — there is a real concern that revealing the truth could fuel dangerous fanaticism.

Myanmar is several years into a historic undertaking: transforming from a reclusive and abusive backwater to a freer and more open nation. In 2011, the long-reviled military ceded power to a parliament under its sway.

The new establishment — largely composed of former generals, albeit with a minority of leaders unaffiliated with the army — promises to rebuild their broken nation. There is much to rebuild. Across Myanmar, illiteracy is rife, meat is a luxury and electricity is scarce.

The census — indicating which areas most desperately need schools, wells, power lines and more — is touted as essential in drafting a blueprint for national rehabilitation.

But it will also probe two of Myanmar’s touchiest subjects, race and faith, and send census takers to remote places at odds or even at war with the central government.

Myanmar’s Muslim population is typically cited as 4 percent of its people, a figure declared by the last census in 1983. That tally was conducted under the iron rule of the dictator Ne Win, architect of the authoritarian ideology that gave Myanmar its infamy. Then and today, the dominant Buddhist faith is enshrined in law and society as superior to all others.

According to the International Crisis Group, the old regime likely cooked the books. Without naming sources, the watchdog group states “strong indications” that the real figure was 10 percent, but a “a political decision was taken to publish a more acceptable figure of 4 percent.” The Burmese Muslim Association, relying on intel from thousands of mosques, says the true figure is likely somewhere between 8 and 12 percent.

The International Crisis Group warns that authentic numbers could be “mistakenly interpreted as providing evidence for a three-fold increase in the Muslim population … a potentially dangerous call to arms for extremist movements.”

Proving that more than 1-in-10 inhabitants of Myanmar are Muslim would indeed play into the delusions of hyper-nationalist Buddhist vigilantes, who are personified by a movement known as 969. Its leading voice, a monk named Wirathu, told GlobalPost last year that “Muslims are like the African carp. They breed quickly and they are very violent and they eat their own kind.”

As these beliefs spread, anti-Muslim riots have grown disturbingly common, leading to hundreds of deaths and forcing tens of thousands into squalid resettlement camps.

Given the intensity of Myanmar’s anti-Islamic fervor, the census should omit all questions about religion, argues Myo Win, a senior member of the Burmese Muslim Association. The International Crisis Group has proposed the same. Another rights group, Burma Campaign UK, declares the census “not worth dying for” and urges its postponement.

“I’m Muslim today,” Myo Win said. “Well, tomorrow, I can be Buddhist. Then the next day, I can decide to be a free thinker. Why do you need to call me Islamic on some list?”

Most Muslims, he said, will not appreciate agents of the state entering their homes and prying into their religious beliefs. The census contains 41 questions. As in the United States, refusing to answer is illegal.

“I think religion is a spiritual issue,” Myo Win said. “We don’t need to mention it to strangers. They shouldn’t list our race and religion. That’s not democratic. It’s discrimination.”

It also risks bloodshed, he said.

Anti-Muslim mobs have shown they need little provocation to attack. Riots have been sparked by serious allegations — including accusations that Muslim men raped Buddhist women — as well as perceived slights.

One 2013 riot broke out when a Muslim woman was accused of merely bumping into a novice monk (monks are supposed to avoid touching the opposite sex) in a market. Another outbreak of violence, in a city called Meikhtila, began with a petty quarrel in a Muslim-owned gold shop. Three days later, 40 were dead and the town’s Muslim quarter was smoldering.

Myo Win believes violence is almost inevitable if census figures point to a Muslim population of more than 10 percent — a figure high enough for extremists to use in suggesting Muslims are breeding Buddhists into extinction.

In Myanmar, tribal identity can determine your friends and enemies, your fortune and your future. In attempting to sort out this ethnic smorgasbord — long obscured by censorship, disinformation and warfare — the census has spawned two conflicting narratives.

Myanmar is spectacularly complex. Roughly the size of Texas, its hilly terrain has proven a perfect incubator for human diversity.

Language, faith and custom can vary from one valley to the next. In one division, grandmothers may play the nose flute and worship Jesus; in the next, life may revolve around golden-spired Buddhist pagodas. There are seven major ethnic groups — which Myanmar kids are taught to recite like the ABCs — and more than 100 smaller groups.

Myanmar’s diversity also helps explain its instability. As in many nations, its mountain dwellers are fiercely independent. Myanmar’s hard-to-reach borderlands are controlled by gun-toting militias drawn along ethnic lines. For decades, more than a dozen guerrilla factions have managed to fend off outright domination by the central government — but never-ending conflicts have left these so-called “black zones” isolated and poor.

The government has ambitiously vowed to dispatch nearly 150,000 census takers into every village, even militia-run zones with a centuries-deep distrust of the government. If successful, they will emerge with critical data on some of Asia’s most ignored enclaves.

Officials seem to acknowledge the climate of mistrust. A widely distributed census explainer asks citizens to “kindly note that this information will only be used for statistical purposes and not to retaliate against anybody.” To prod villagers into opening up, the government will deploy local teachers to accompany census officials.

Beyond the dire warnings from Muslims, complaints have arisen from other ethnic groups, some of them armed.

Some tribes resent being erroneously lumped in with larger ethnicities. Others, who keep low profiles to ensure survival, aren’t eager to answer 41 questions for unknown officials. The Muslim Rohingya, among the world’s most persecuted minorities, will be forced to write in their ethnic affiliation, which is not listed as an option on census forms.

Still, the government and the UN have not relented to demands to postpone the census or cut questions on religion.

“Providing accurate data, including on current religious practice, can help to end speculation and rumors,” Jackson said. “This information can help efforts to promote inclusiveness and reconciliation which underpin the reform effort.”

Myanmar is still shaking off its police state era, which asphyxiated free speech and encouraged villagers to snitch on dissident neighbors. Just a few years ago, mere whispers of dissent were punished by torture (sometimes with electric shocks) or years in prison.

“It’s not going to be easy,” Tonkin said. “You can imagine them going into a house and spending the whole morning trying to get replies. All while the family wonders, ‘Who is this girl? Why should we answer her questions? What’s it all going to mean?’”

Unlike previous census endeavors, Tonkin said, this one will be very hard to falsify. “We might as well face the truth,” he said. “I can’t see anything gained by delaying it.”

Despite objecting to the official effort to collect religious affiliations, Myo Win is eager to know the truth. His Burmese Muslim Association is preparing an independent tally of Myanmar’s Muslims via its vast network of mosques.

He suspects the results — which they may or may not release — will point to a Muslim population of up to 12 percent. If the old census is doctored, as alleged, that would falsely suggest a tripling of Myanmar’s Muslims. Even the US State Department, in a report on religious freedom, has proclaimed that the old census “almost certainly underestimated the non-Buddhist proportion of the population.”

But while this is accepted among many of Myanmar’s Muslims and certain foreign watchdog groups, these allegations are hardly mainstream in Myanmar.

“We live under a hidden apartheid policy,” Myo Win said. “We don’t trust people who want to know who’s Muslim and where we live. So many of us are afraid to even say we’re Muslim for our own security.”