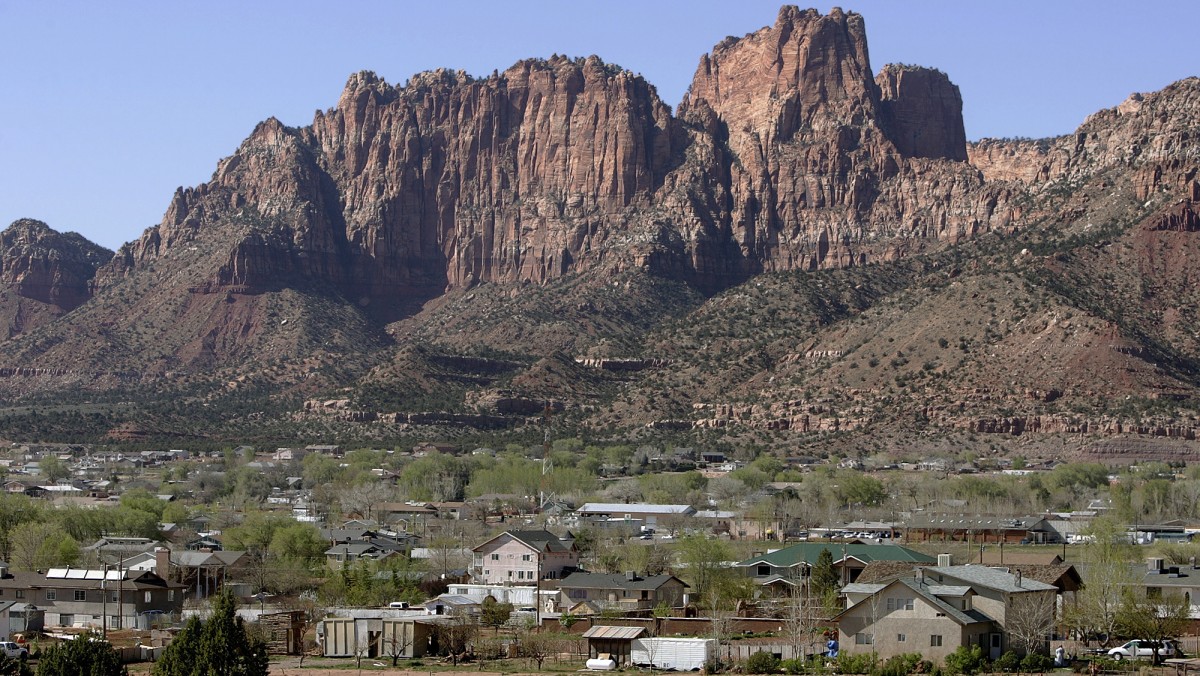 Hildale, Utah sits at the base of red rock cliff mountains with its sister city, Colorado City, Ariz. in the foreground in this Thursday, April 20, 2006 file photo. An attorney for local law enforcement in the two polygamous towns, where most residents are members of the Fundamentalist Church of Jesus Christ of Latter Day […]

Hildale, Utah sits at the base of red rock cliff mountains with its sister city, Colorado City, Ariz. in the foreground in this Thursday, April 20, 2006 file photo. An attorney for local law enforcement in the two polygamous towns, where most residents are members of the Fundamentalist Church of Jesus Christ of Latter Day Saints run by the groupâs jailed leader Warren Jeffs, says the U.S. Justice Department plans to sue both communities, claiming religious discrimination. (AP Photo/Douglas C. Pizac)

(MintPress) – The United States Justice Department has sued two polygamous towns in Utah and Arizona with claims that the border towns used religious discrimination against non-sect members by intimidating non-followers by vandalizing property, cutting off utility services and not offering police protection.

Accusations include making housing unavailable, trying to return brides to the homes from which they fled, rounding up all the dogs in the towns and shooting them, denying police protection to non-sect members and refusing to provide electricity or water services. In addition, sect members were allowed to destroy crops, vandalize property and trespass.

The lawsuit, which was filed against Hildale, Utah and Colorado City, Ariz., states that authorities in the towns supported efforts to victimize members of the community who did not follow the polygamous faith of the Fundamentalist Church of Jesus Christ of Latter Day Saints (FLDS). The Colorado City Marshal’s Office patrols both communities, with the case including residents who were never FLDS members, those who left the group on their own and those who were excommunicated from the sect.

The church is run by the group’s leader, Warren Jeffs, who is currently serving a life sentence in Texas after being convicted on child sex and bigamy charges.

According to the lawsuit, town leaders and Colorado City law enforcement have deprived the constitutional rights of non-sect residents for decades while simultaneously catering to the wishes of Jeffs.

«For decades, officials of the cities have, by operating at the direction and for the benefit of the FLDS, abdicated their official duties to protect the rights of all citizens equally and to administer governmental functions consistently with the Establishment Clause of the United States Constitution,» federal officials charge.

Non-sect members of the community have come out, telling their stories of religious discrimination.

She and her family were denied water and power from the utility companies because their family does not follow the polygamous religion. In addition, police officers in the town intimidated her family and did not help when a FLDS member dug up their property with a construction truck.

Although video has documented some of the discriminatory events, authorities from the Marshal’s Office are fighting back, saying that the allegations are unfounded.

«There’s nothing to support the allegation that non-FLDS members are treated differently,» attorney Blake Hamilton told The Associated on Thursday. Hamilton represents Hildale and the Marshal’s Office.

Federal officials have also stated that there have been instances in which police officers in the towns made traffic stops and arrests without cause as well as not allowing children of non-following members to use the public playground.

While how much will be sought in damages has not been specified, the lawsuit will cover damages for victims, fines against the towns and court orders prohibiting harassment of non-FLDS members.

«Finding a solution to the illegal activities that have been occurring in Colorado City for decades has been one of my highest priorities,» Horne said in a statement. «I remain committed to stopping the illegal conduct perpetrated by the FLDS church on non-church members.»