DAMASCUS (Op-ed) — Juliette Harkin, Associate Lecturer on Politics and International Relations at Anglia Ruskin University, wrote an article dated May 1, 2018, titled: “‘Assadism’ is destroying Syria – here’s where it came from.”

Political scientists from around the world have written on the subject of the Syrian conflict, which began in March 2011 and is ongoing. In order to understand the subject well, it is necessary to visit Syria, speak to the people, and not depend on mainstream media to supply you with the media-mantra chanted over and over again. There is a vast difference between reading a news article, and actually being in Damascus, Aleppo and Homs during this period of conflict. As a Syrian-American, my years of living in Syria have given me a front-row seat to the tragedy, and allow me to see to the core of the conflict.

Ruskin’s article is based on the premise that President Bashar al-Assad is the core problem, and Syria would be better off without him. However, he is not the core problem. The beginning of the conflict was not about the president ordering a brutal military crackdown on peaceful protesters. The fact that dozens of Syrian security forces were killed in Deraa on the very first night of ‘protests’ reveals the fact the protesters were armed and willing to kill to advance their political aims. It was an armed uprising from the first moment, and it was not grass-roots in composition: it was the Libyan mercenaries in the employ of the CIA who were in Deraa prior to the beginning of the ‘revolt,’ as they stockpiled weapons in the Omri Mosque. Libyan mercenaries, armed with weapons brought over the border at the Jordan-Deraa crossing, can never be considered ‘grass-roots.’

Neither grass-roots nor a revolution

Had the conflict actually been ‘grass-roots,’ the ‘revolution’ could have been successful, and the Assad government would have been forced from Damascus. The fact that Assad is still in office attests to the steadfastness of the majority of the Syrian people. A successful revolution depends on the national army splitting and siding with the population who want regime change. However, the Syrian Arab Army (SAA) never split, and never turned on the government. The SAA are a national army in Syria, made up of every able-bodied male over the age of 18 who is not enrolled in university. Because the population of Syria is about 80 percent Sunni, the majority of the SAA are from that sect. There were many defections among the army, but it was never enough to affect the performance of the army, and the unity of the army meant the armed opposition could not ever win against the SAA.

Those who were fighting the Syrian government in the streets of Deraa, Homs, East Aleppo and East Ghouta were following Radical Islam, and were mounting an armed struggle to remove the secular government and install Shariah Law according to Wahabi doctrine as the new Syrian Constitution. These groups were supported by the U.S.-NATO-Turkey-Jordan-Qatar-Saudi Arabia alliance, known as “The Friends of Syria.” The attack on the Syrian government beginning in March 2011 was a foreign-planned and -funded attack, to produce regime change, for the political benefit of the  U.S. and its allies, as well as the neighbors of Syria who were already following or promoting Radical Islam as a political ideology. The very same Radical Islamic political party, The Muslim Brotherhood (MB), which had started the Hama uprising in Syria in the 1980’s, was front-and-center in the Syrian crisis. Virtually every founding member of the Syrian National Coalition (SNC) — located in Istanbul, Turkey — was an MB member. They used a Christian-turned-atheist/Communist, George Sabra, as their cover, camouflaging their real agenda.

Anyone studying the documentation of the Hama uprising will find that the Muslim Brotherhood members were committing sectarian massacres against minority sects. President Hafez al-Assad delivered a famous speech in which he portrayed the Muslim Brotherhood as willing to slaughter their own neighbors, and relatives, in order to further their sectarian goals.

Sectarian, constitutional, and dedicated to resistance

President Bashar al-Assad of Syria is approaching the end of 18 years in office. His father President Hafez al-Assad died in summer 2000, and the transition was made to his son taking over as the leader of Syria through a constitutional procedure. At the time of the death of Hafez al-Assad, the Syrian Constitution stated there was one legal and recognized political party: the Ba’ath Party, which has a secular and socialist party platform and is committed to the political ideology of the resistance to the occupation of Palestine.

However, during the Syrian crisis in 2012, a new Constitution was drafted and ratified by popular vote. That new document abolished the old one-party system, and allowed for multiple registered parties, with the exception of any sectarian parties.

Bashar al-Assad is the president of the only secular country in the Middle East.

Certainly, there is a Syrian opposition. They fall into many different groups: some advocate armed struggle, and others do not. Some of these various groups are strictly following Radical Islam, which is a political ideology and is not a religion or sect. Some of the groups are secular and democratic.

Assad will be remembered by some as the man who ordered the bombing of Syrian neighborhoods. However, if any country, including the U.S., had armed terrorists embedded in neighborhoods, and holding civilians hostage for years, and targeting unarmed civilians constantly, it too would be using its own military and security forces to fight the terrorists in order to liberate the captive civilians. Indeed, a situation occurred in the U.S. in which an armed revolutionary group was dealt with in the same way.

People living a life of safety thousands of miles away could not possibly understand what life is like while living for five years underground while being held captive in your neighborhood. The only way to really understand this is to speak directly to the civilians freed from East Aleppo in December 2016 and East Ghouta in April 2018. If you can’t speak to them personally, at least look for their own videos online, or perhaps their own words incorporated into news articles. Those people were praying for the Syrian Arab Army (SAA) to advance and free them. One woman stated, “We heard the bombs coming our way, and we were happy knowing we might finally be free.” 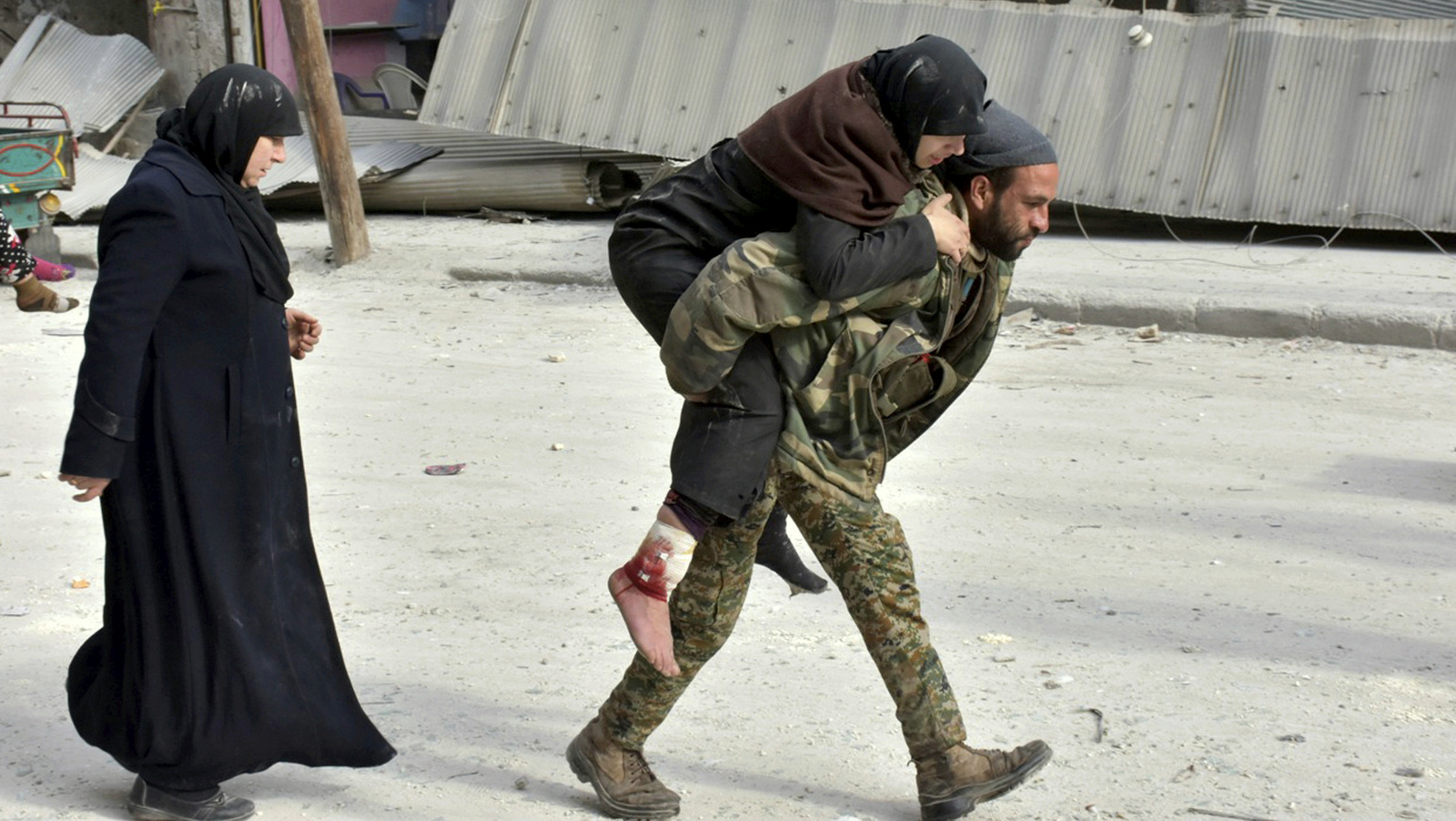 A Syrian soldier carries a wounded woman in eastern Aleppo, Syria after it was liberated from rebel groups, Dec. 12, 2016. (SANA via AP)

Of course, not everyone gets to freedom. Many innocent civilians were killed in the battles by both sides. In war, the innocent always suffer.

The president of Syria is not a Sunni; however, his wife is. The majority of the officials in the Syrian government are Sunni, as well as the majority of those who hold Parliamentary seats. The media-mantra of “Alawite Ruling Elite” simply is not accurate.

Syria is a mosaic of 18 different sects. It is inaccurate to portray Syria as a Sunni population, like Saudi Arabia for example. The Syrian culture has been tolerant of all three major religions: Judaism, Christianity and Islam. There was always a mixture of religions and sects across Syria. Public schools were mixed, as well as neighborhoods. Syrians lived next to each other, studied at the desk next to each other, and worked side by side with each other. Sectarian conflict was not part of Syria’s culture: just the opposite was true.

The typical Syrian will tell you they say “Happy Holiday” to their neighbors, even if that was not their own holiday. The majority Sunni population in Syria have kept the government in power, and prevented the collapse of the al-Assad administration. In June 2014 the first multiparty Presidential election took place. It was constitutionally scheduled, even though the conflict was raging in many areas. Assad took about 88 percent of the votes cast out of a field of three candidates, two of whom were Sunni. Many people have said the reason Sunni citizens voted for him was because they felt he was the best person to take the nation through the war successfully. They saw him as a stabilizing force in Syria, and the person best suited to finishing the war.

The political ideology of resistance to the occupation of Palestine runs deep in the Syrian culture and, after 40 years of that ideology being taught in schools as well as various political and social groups, the average Syrian, regardless of religion or sect, feels strongly about this subject. Because of that ideology, it was easy to understand the alliances between Syria, Iran and Hezbollah who all share the resistance ideology. Many analysts feel that Syria was attacked by the U.S.-NATO alliance because of its steadfast resistance ideology and shared friendship with Iran and Hezbollah.

The Syrian conflict is coming to an end, though we can’t predict its last day. Assad has remained through seven years of armed conflict. The next presidential election is June 2021. Syrians who have suffered through the conflict are dreaming of a peaceful future. Refugees abroad may be dreaming of returning home to peace. The enemies of Syria are losing. The Syrian people have resisted regime change for the benefit of the  U.S.-NATO war machine, which used Libya as the field-test for the Syrian conflict. Syria, however, is different.

Top Photo | Syrians hold up the national flag and pictures of Syrian President Bashar Assad at a gathering at Saadallah al-Jabiri Square in Aleppo, Syria, Jan. 19, 2017. Thousands of Syrians gathered in the main square to celebrate last month’s capture of the whole city by the army leading to a disperse by the gathering. (AP/Hassan Ammar)

Steven Sahouni is an independent Syrian political analyst and writer based out of Lebanon; he has been covering the Syrian crisis since it’s onset in 2011 and has published several articles in numerous media outlets – He is regularly interviewed by US, Canadian and German media.