Hugo Chavez Is Gone, But His Support For Palestine Continues

Through an initiative to provide 1,000 Palestinians with a free college education, Venezuela is doing what others are not: addressing the long-term needs of Palestinians to create a future for the victims of settler-colonialism. In keeping with the late Hugo Chavez’s legacy for Palestinians, Venezuelan President Nicolas Maduro has announced a scholarship program for Palestinian students that reflects internationalist solidarity, as well as the success of the Cuban model of education and health care. Maduro announced the initiative to train 1,000 doctors through the

END_OF_DOCUMENT_TOKEN_TO_BE_REPLACED

One Year After Death, Venezuelans Celebrate Legacy Of Hugo Chavez

Despite recent moves of opposition, support for successor Nicolas Maduro and socialist programs endures one year after the death of Chavez. Following a month of anti-government protests against Venezuelan President Nicolas Maduro, tens of thousands of government supporters filled the streets Wednesday to commemorate the one year anniversary of the death of Maduro's ally and predecessor, Hugo Chavez. As Reuters reports, "Tens of thousands of red-clad 'Chavistas' were gathering for

END_OF_DOCUMENT_TOKEN_TO_BE_REPLACED The rift in Venezuela continued to deepen Sunday as thousands of anti-government opposition activists took to the streets of Caracas, Venezuela in an attempt to grow their ranks in a country that remains largely pro-government. Under the banner "Caracas is mobilized," students and other Venezuelans protesting against the democratically elected

END_OF_DOCUMENT_TOKEN_TO_BE_REPLACED

Competing Marches Bring Hundreds Of Thousands To Streets Of Venezuela 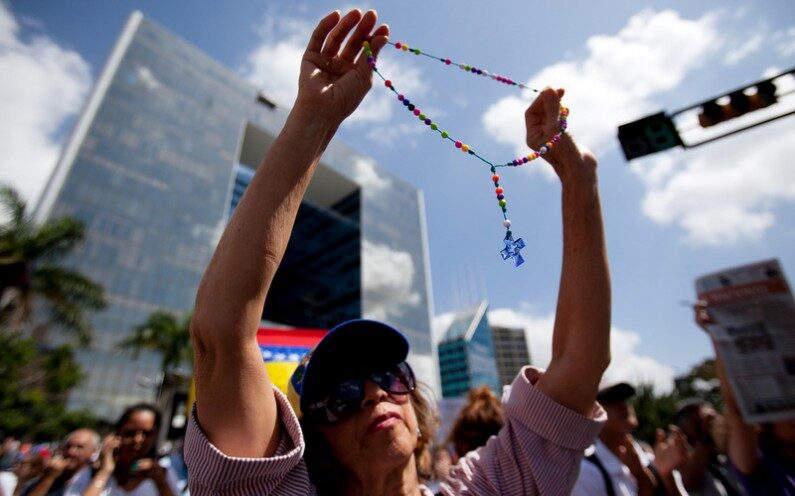 Unrest continued in Venezuela on Saturday when competing pro- and anti-government marches brought an estimated hundreds of thousands onto the streets. Opposition forces blame economic problems and crime on leftist President Nicolas Maduro, while Maduro says the violence is part of a strategy devised by right-wing groups, with the support of

END_OF_DOCUMENT_TOKEN_TO_BE_REPLACED

Right wing groups have taken to the streets destroying property and shooting at police officers. Here we go again. As right wing groups with shady connections riot in Venezuela, demanding the democratically elected left wing president resign, the US State Department is dodging questions as to whether US intelligence agencies are assisting the rioters. For those with hazy memories, we’ve seen this movie before. In 2002 the Venezuelan right

END_OF_DOCUMENT_TOKEN_TO_BE_REPLACED

If Venezuela Is To Survive, Then Compromise Must Become The Country’s Watchword.

Recent protests in Caracas against the continued rule of Chavez’s political heirs suggest that the electoral revolution carried out by Venezuela’s late caudillo is a least a bit shaky.

When Hugo Chavez, Venezuela’s democratically-elected strongman died last March, there was some question about how long the neo-socialist regime created by the late paratrooper-turned president would last. Would it endure as its founder intended, or totter and fall in a Latin version of a color revolution of the type that rocked Ukraine and Georgia