Max Blumenthal asks the Washington hosts of Andriy Parubiy, the speaker of Ukraine’s parliament and founder of two neo-Nazi parties, why they were legitimizing an open fascist at the heart of the extremism plaguing his country. While racist violence raged through Ukraine, punctuated by a wave of attacks on Roma encampments by the state-funded C14 neo-Nazi militia, Congress played host to an actual Ukrainian fascist. He was Andriy Parubiy, and besides being the proud founder of two Nazi-like parties — the Social-National Party and the Patriot of Ukraine — he was the

END_OF_DOCUMENT_TOKEN_TO_BE_REPLACED

When Israel Invited a South African Nazi on a State Visit

A mostly forgotten aspect of history is how Israel’s “left-wing” Zionist regime in the 1970s collaborated with South Africa’s apartheid regime to discuss nuclear weapons testing in the South African desert. Opinion -- One of the most under-reported aspects of security policy in the Middle East is Israel’s nuclear weapons program. The apartheid state is estimated by the U.S. government to have somewhere in the region of 200 nuclear warheads. The secret program to develop these weapons of mass destruction started in the late 1950s and eventually bore

END_OF_DOCUMENT_TOKEN_TO_BE_REPLACED

Hate sites have realized that the U.S. has no monopoly on white nationalists and other far-right extremists. 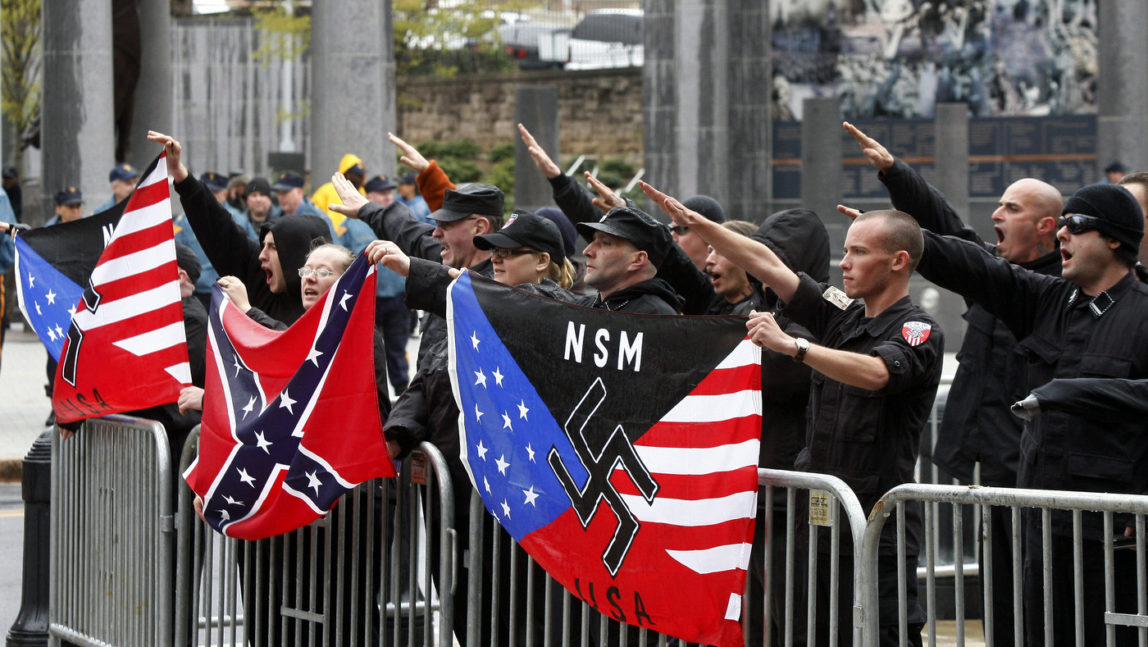 How does a leading neo-Nazi website that has railed against Hispanic immigrants expand its audience beyond a loyal base of U.S. white supremacists? By publishing a Spanish-language edition, of course. The Daily Stormer — infamous for orchestrating internet harassment campaigns by its "Troll Army" of readers — recently launched El Daily Stormer

END_OF_DOCUMENT_TOKEN_TO_BE_REPLACED

The FBI: The Silent Terror Of The Fourth Reich

“Adolf Hitler is alive and well in the United States, and he is fast rising to power.”—Paul Craig Roberts, former Assistant Secretary of the Treasury, on the danger posed by the FBI to our civil liberties

Lately, there’s been a lot of rhetoric comparing Donald Trump to Adolf Hitler. The concern is that a Nazi-type regime may be rising in America. That process, however, began a long time ago. In fact, following the second World War, the U.S. government recruited Hitler’s employees, adopted his protocols, embraced his mindset about law and

END_OF_DOCUMENT_TOKEN_TO_BE_REPLACED

The Trump regime’s exclusion or expulsion of refugees without regard to the danger awaiting them on their return to their point of origin has some resemblance to this Nazi callousness in expelling stateless people who had nowhere to go and who lacked proper passports, having only a laissez-passer from Geneva. Here are two newspaper articles from spring, 1933. They concern the issue of early Nazi policy toward Germany’s Jews. In the first, the German ambassador to the UK maintains that the issue isn’t Jews but Immigrants. In the second, it is clear that only a few weeks later German Jews with citizenship were nevertheless being forced out. Those Jewish

END_OF_DOCUMENT_TOKEN_TO_BE_REPLACED

The National Democratic Party has an affinity for Nazism but doesn’t threaten democracy, the court said. (REPORT) --- A German court ruled against banning the country's far-right National Democratic Party, NPD, on Tuesday, although the group has frequently been called anti-constitutional. The party has been described as a neo-Nazi organization supporting an ethnic-based nation state and anti-Semitism. “The NPD intends to replace the existing