Texas Police, Looking for More Military Hardware, Tout Its Use In Harvey Relief

In the wake of Hurricane Harvey, local Texas police are using the recovery efforts to justify the continued existence of a controversial program that critics argue strongly contributes to a dangerous trend of police militarization. According to the Houston Chronicle, local police agencies are arguing that excess military equipment they had received from the Pentagon through its controversial “1033” program allowed them to rescue people in areas they could not have reached otherwise. Federal data cited by the Chronicle showed that the greater Houston area has received more than $13 million in military equipment via the program since 2014.

“They tend to think that we’re militarizing ourselves. No, we’re not,» Sgt. Jimmie Cook of the Harris County Sheriff’s Office told the Chronicle. «We’re not looking for M16s. It’s useful gear that helps supplement our budget and it doesn’t cost the county anything except for the tank of gas to go pick it up.»

While the Chronicle piece on the matter paints an overall rosy picture of how heavy military equipment is being used by Houston-area police – as well as its role in flood rescues — it also admits that much of the military equipment ended up not being used in flood rescues after all. The article notes that certain classes of military-grade vehicles were rendered ineffective for work in flood situations due to concerns about electrical wiring or due to department concerns that the vehicles could suffer damage that would render them useless in the future.

The article does not mention that non-military equipment and vehicles designed for use in flood zones could have been equally, if not more, effective in post-Harvey rescues. It also failed to explain how heavy weapons such as grenade launchers, body armor and powerful military-grade rifles – a larger portion of the items departments received than were the vehicles used in flood rescues – contribute to disaster-relief, as opposed to simply furthering the militarization of local police.

Despite the fact that war-zone vehicles and equipment were not necessarily as effective as local law enforcement suggested, a number of local departments are now clamoring to increase their stock of military-grade assets in Harvey’s wake. This, along with the positive tone in which the Chronicle article portrayed the program, caused critics to assert that the Harvey pretext is being used to justify a program that the  ACLU has argued pushes police to “wage war in our neighborhoods.”

A program that puts deadly weapons in the hands of police is being justified by #HurricaneHarvey rescue efforts! 🙁 https://t.co/BQC7hZW4vW

Weapons stockpiles begging to be used The 1033 program generated nationwide controversy during protests in Ferguson, Mo. over police brutality. Then-President Barack Obama subsequently placed restrictions on the program, which have since been lifted under President Donald Trump. Critics of the 1033 program have long argued that the program has fueled the militarization of local police forces by giving them millions of dollars worth of military-grade equipment with little to no oversight regarding how the equipment is being used and without providing proper training to participating departments.

Though proponents argue that the program is a boon to local budgets — as local departments have to pay only the cost of picking up the supplies —  the ensuing militarization has increasingly resulted in an “us vs. them” attitude among police and has fomented increases in police-committed homicides and brutality. In many communities, the days of local police “protecting and serving” the residents seem to be over, having given way to militarized police who often engage in unnecessarily aggressive behavior enabled and incentivized by ever-growing weapon caches. 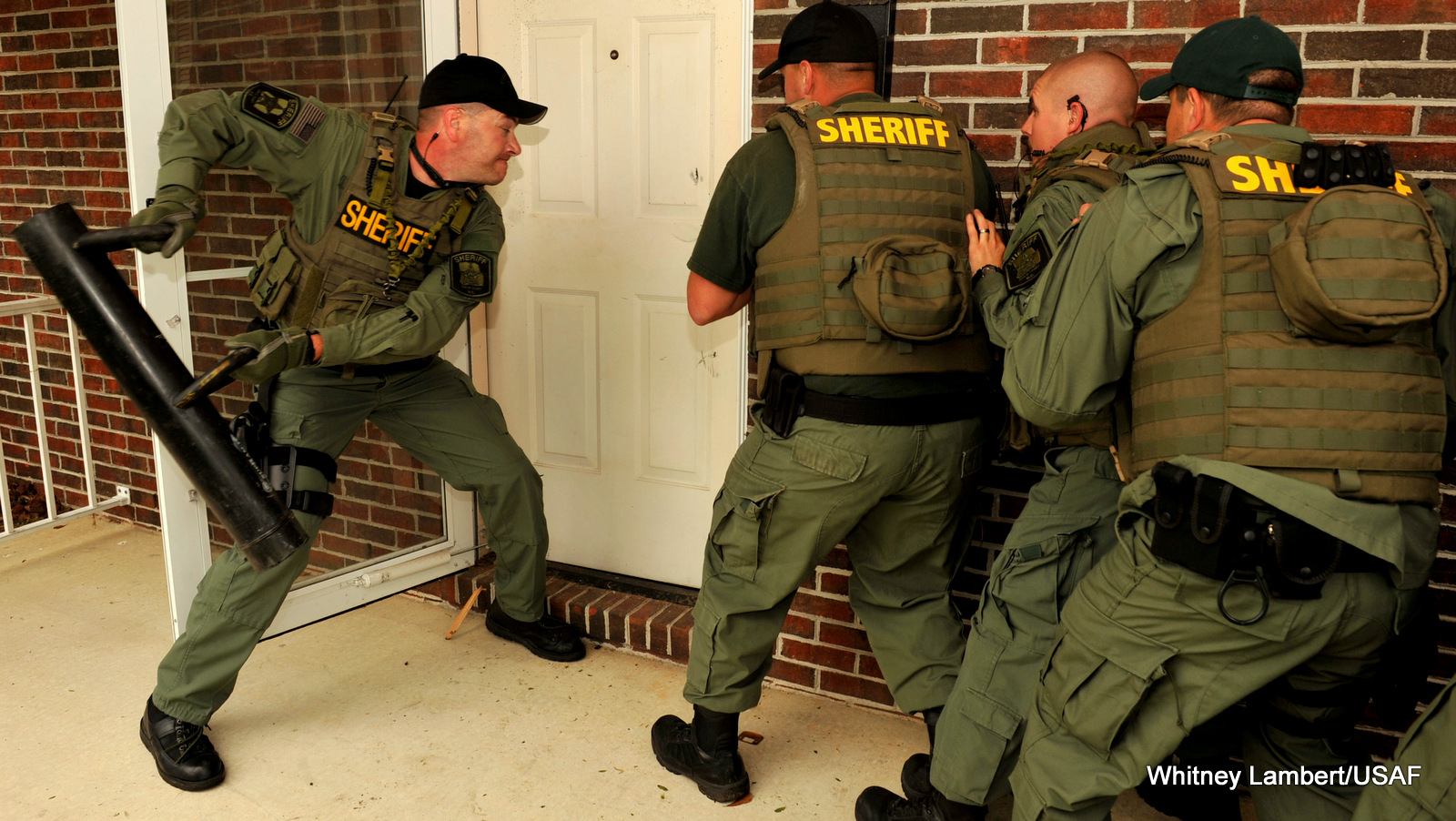 In Texas, the militarization of the local police force has been of concern for some time, particularly in the use of “no-knock” SWAT raids — which have an obvious propensity to trigger confusing and dangerous situations — to conduct routine police work, such as the serving of warrants. Much of the “useful gear” cited by Sgt. Cook has been used in these raids, such as the one that claimed the life of Jermaine Darden, father of two, who died after being tased by police. No contraband was found in Darden’s home.

In another case, an innocent man was forced out of his bathtub during a no-knock raid and then suffered numerous beatings and electric shocks, while the police employed concussion grenades and shot rubber bullets. When the raid turned up nothing, police accused the man of having “assaulted” them, charges that were later dismissed.

Texs has come under particular scrutiny for no-knock raids as many law enforcement bodies in the state have no written rules specifying that police must first knock before entering a residence, regardless of whether a warrant was issued. A Texas rights group found in 2014 that police throughout the state often violate the Constitution and put the lives of civilians, as well as officers, unnecessarily at risk.

Texas’ no-knock raid problem, however, is symptomatic of a national issue. An ACLU study conducted in 2014 found that – nationwide – 80 percent of paramilitary raids studied were for routine police work while only 7 percent were for genuine emergencies. Thirty-six percent of such raids resulted in not a single bust, while in 29 percent of cases SWAT reports failed to mention whether anything was found – an omission much more likely if no contraband is uncovered. More than 20,000 such raids are conducted throughout the United States annually and frequently result in grave harm to civilians, including children.

Also notable is the fact that militarization of police departments disproportionately affects people and communities of color. This is particularly true in Texas. A pair of similar cases from 2014 highlight this fact. In one case, Henry Magee, a white man, shot at police during a no-knock raid in order to protect himself and his then-pregnant girlfriend. In another, Marvin Guy, a black man, also shot at police during a no-knock raid, thinking he was being robbed. Both men were charged with capital murder while contraband had only been found in Magee’s residence. However, the similarities stop there. Magee was acquitted for having acted in self-defense while Guy was imprisoned for three counts of attempted murder, with prosecutors now seeking the death penalty.

Given that the even Houston’s post-Harvey recovery has been complicated by the city’s racial disparities, Houston-area law enforcement’s push to justify and expand its participation in the 1033 program seems likely to only further complicate life in these communities as they struggle to rebuild and recover.

Editor’s Note | A previous version of this story stated that no contraband was found in the house of Henry Magee during a no-knock SWAT raid in Texas. Police actually found several marijuana plants within Magee’s home at the time of the raid. The story has been updated to reflect this. We regret the error.