WASHINGTON, D.C. – (ANALYSIS) After over a year and a half of anticipation, the first formal meeting between Donald Trump and Vladimir Putin was certainly a momentous occasion, but hardly for the intended reasons.

It remains too early to definitively tell whether Helsinki will go down in history as the beginning of a new stage of rapprochement between Washington and Moscow or the trigger for a new downward plunge in bilateral relations between the two rivals. But the signs from the U.S., so far, are very, very grim.

Regardless of where one stands on the question of U.S.-Russia ties and the qualities (or lack thereof) of the two countries’ leaders, the event — billed by Trump as a continuation of “the proud tradition of bold American diplomacy” — was a four-alarm dumpster fire from the standpoint of U.S. imperialist pride and prestige.

Not only was little accomplished, as skeptics predicted, but the tsunami of bipartisan outrage resulting from the summit could plunge bilateral relations into the abyss for years to come.

My cooling off take: This summit accomplished very little of substance, perhaps because U.S. wanted to avoid perception of appeasing Russia. If so, ironic that closing press conference left Trump & team with all the blowback, but no deals.

The striking contrast between the former real estate mogul from Queens versus the self-possessed, confident ex-KGB lieutenant colonel from Leningrad was altogether predictable. So, too, was Trump’s performance – which was “extremely strong and powerful” only in terms of the cringe-inducing torrent of gaffes and clichés flowing from his mouth.

One can only imagine the sense of bemusement the Russian president felt as he witnessed his counterpart stumble in the face of the usual questioning by reporters about “collusion” in the 2016 elections or Russia’s intervention in Ukraine. Putin himself — perhaps hoping to cushion the inevitable blowback in Washington — volunteered that Trump “stands firmly” by the U.S. opposition to Russia’s annexation of Crimea.

The summit showcased the double-edged nature of Trump’s political brand: while his brash, erratic style as an amateur was the essential factor in his 2016 election victory, his aggressive unwillingness to compromise with key pillars of the U.S. military and intelligence apparatus have been a glaring chink in his armor. His inability to undertake the painstaking work of preparing the ground in Washington for a turnaround in bilateral relations, exacerbated by his blunt rejection of U.S. intelligence findings, may have driven a stake into the heart of his Russia policy.

The president’s subsequent backtracking and tortured writhing in the face of opposition unleashed in Helsinki has, so far, only tightened the noose around his neck. According to the results of a CBS poll released Thursday, less than a third of U.S. voters approve of Trump’s performance at the summit.

Coming on the heels of Trump’s visits to Brussels and London – which entailed bruising and widely-derided spats with German Chancellor Angela Merkel and British Prime Minister Teresa May –  the Helsinki summit shredded the president’s credibility in the eyes of the U.S. foreign policy establishment. And without the cooperation of the legislative branch, the pursuit of a new path in bilateral relations remains unlikely. Such cooperation was already a remote prospect, as last year’s seizure of Russian diplomatic properties and sweeping rounds of sanctions imposed by Congress proved.

Russian officials like Foreign Minister Sergei Lavrov haven’t shied away in the past from openly criticizing the “primitive and loutish,” “inconsistency” of White House policies to their U.S. counterparts. But this past week left no doubt about Trump’s impotence in the foreign policy realm.

As Russia expert Michael Kofman of the Center for Naval Analyses told The Huffington Post:

The Russians walked away [from Helsinki] with a clear impression that [Trump] does not control Washington, D.C.” A woman holds a sign depicting Vladimir Putin and Donald Trump during a protest outside the White House, July 17, 2018, in Washington. Andrew Harnik | AP

Unless one was trapped in a cave this past week, it’s been impossible to avoid the shrill media hyperbole about “treason,” or the sanctimonious patriotic mantras about Trump betraying the “honor of the First Office” or “brave intelligence professionals” being repeated ad nauseam across U.S. news.

Such uber-patriotic platitudes have long been the stock-in-trade of TV commentators. But it’s one thing when liberal cable news anchors or Putin-obsessed lawmakers like  Senator John McCain are hammering away at the president’s Russia stance – it’s quite another when right-wing propagandists like Neil Cavuto and Laura Ingraham or GOP power brokers like Senate leader Mitch McConnell turn tail and join the chorus.

Even top officials of the Trump cabinet – such as White House chief of staff John Kelly – closed ranks with the rest of the military, intelligence, and bipartisan political establishment to warn Trump that openly agreeing with the Kremlin is a cardinal sin within the imperial halls of power. Hence the president’s unconvincing and laughably half-hearted equivocations over “double negatives” in the days following Helsinki.

For Global Times, a newspaper operated by the Communist Party of China’s main newspaper, the essential contradiction of the Helsinki dilemma lies in Trump’s eclectic populism and the “unrelenting hegemonic policies” that characterize U.S. foreign policy approaches. In a Tuesday editorial, the paper noted:

Trump’s foreign policy is messy. He wants to win more support domestically. He firmly believes in his own instincts while despising the fundamental rules of international relations. Moreover, he likes to take risks. His diplomacy is often populist … Current U.S. foreign policy is not guaranteed to become a part of its long-term strategy. Policy changes in many aspects will likely be temporary.” In this March 6, 2009, photo, then-Secretary of State Hillary Clinton and Russian Foreign Minister Sergei Lavrov hold together a device a with a red button symbolizing the intention to «reset» U.S.-Russian relations during their meeting in Geneva. Fabrice Coffrini | AP

Anti-Russian geostrategy has long been the consensus on both sides of the aisle in the U.S. establishment. This is true not only in terms of the “intelligence community” or so-called “deep state,” but for much of the “in-broad-daylight state” as well. The only exception is the shrinking pool of foreign policy realists and diplomats capable of understanding the sublime nuances, core interests and spaces for compromise involved in bilateral diplomacy.

By nature, Republican politicians – like their Democrat counterparts – are flip-flopping opportunists who sway in whichever way the political wind blows or lobbyist money flows. This being election season once again, the pressure to not lose face before constituents is all the more important

U.S.-Russia relations have always been a hostage to the dynamics of partisan contention dictating the eclectic policy stances of successive U.S. administrations. This has been true long before the “cyber Pearl Harbor” or “Kristallnacht” of alleged Kremlin election manipulation became the holy grail of Democratic Party grievances with the GOP.

Need we recall how, amid the Obama administration’s failed attempts to “reset” relations with Russia, it was the Republican Party who opposed arms reductions treaties, the repeal of Cold War-era laws like Jackson-Vanik, and the tapering-down of tensions in Russia’s “near abroad”? Only six years ago, Obama himself answered Republican suggestions that Russia is America’s top foe with the snappy retort, “the 1980s are now calling and they want their foreign policy back”?

Yet the spark provided by Trump’s Helsinki “blasphemy” has rekindled the burning bush of Russophobia across the U.S. on an epic scale, transforming sanctions, NATO militarism, and “confronting Russian aggression” into bipartisan articles of faith. 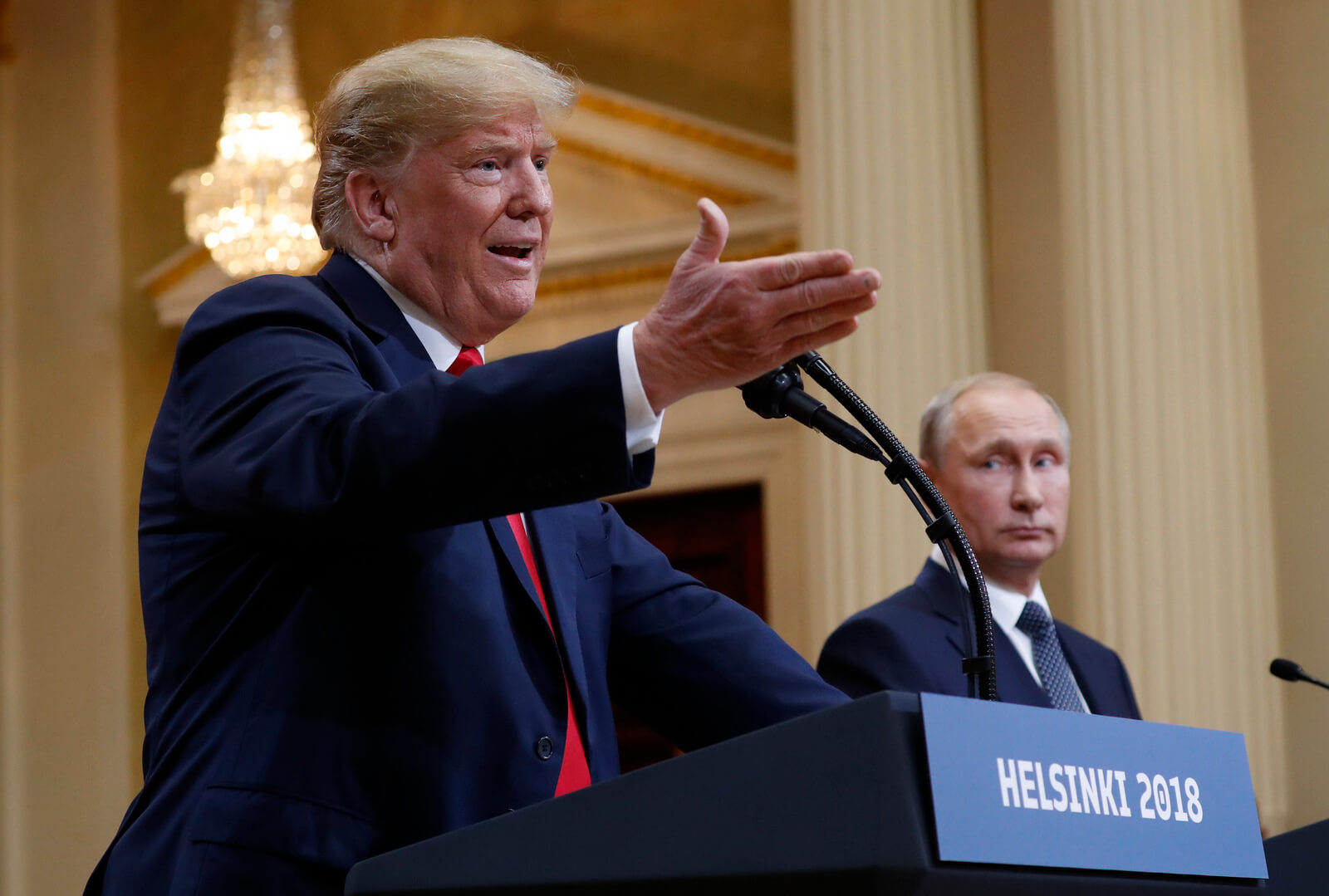 One can call President Putin many things, but after nearly two decades helming the Russian state through unending crises, the man is hardly naïve. And for what it’s worth, if a “winner” emerged from Helsinki, then “Vova” was it.

“The optics of [Helsinki] are great validation for Vladimir Putin as he starts a fourth term [and] Putin is a master troll who will use the meeting to troll the hell out of the United States and the U.S. media and the U.S. establishment,” Michael Kofman observed.

Putin’s realistic grasp of the U.S. imperialist establishment’s nature was on full display last September when he referred to an infamous slip of the tongue by then-U.S. President George W. Bush at the 2007 APEC Summit in Australia. Putin quipped:

It’s difficult to have a dialogue with people who confuse Austria and Australia. There is nothing to do about it. Apparently that’s the level of political culture of a certain part of  the American establishment … America is really a great nation and the Americans are a great people if they can endure so many people [in the government] with such a low level of political culture.”

Yet the political capital Putin gains from “trolling,” or from the optics of his casual, cool performance alongside the feverish blunderer Trump, are a pittance when compared to the potential gains Russia could potentially enjoy from a bridging of the U.S.-Russia divide.

Russia isn’t without its share of problems, after all. Despite its still-formidable political and military clout, it continues to struggle with grim demographic trends, an austere federal budget caused by the drop in oil prices, and a sagging economy vulnerable to new waves of sanctions. Its financial sector is mainly active in countries that formerly comprised the Soviet Union, and its top corporations are mainly involved in raw material extraction and processing. Corruption, poverty, and an aging industrial and technological base inherited from the USSR remain the soft underbelly of present-day Russia.

Taken together, these factors belie the breathless claims from both the Western left and the right that Putin’s Russia is some sort of “imperialist” threat to the massive imperialist powers at the core of the world capitalist economy. And besides, no underdeveloped country wants to permanently remain on the bad end of Uncle Sam’s nuclear arsenal.

Every cloud has its silver lining. The resumption of actual expert dialogue on essential matters like arms control pacts and military-technical cooperation may help lay the groundwork for measured, mutually-beneficial progress in state-to-state ties and a modest drawdown in tension.

New START, INF and military-to-military contacts are areas where bilateral progress not only is attainable but would represent a real breakthrough … A focus on arms control and military discussions can ensure that even as Washington and Moscow continue to disagree and compete in years to come, they are better equipped to calibrate their policies and avoid instability.”

In the short term, a reduction of tensions between the U.S. and Russia remains a possibility, however remote. On Thursday, the White House even announced that a formal invitation for Putin to visit Washington was in the works – a far cry from the turnaround Trump spoke of in Helsinki, but a small signal that things are moving forward.

All else being equal and absent new geopolitical flare-ups, we can expect new salvos fired from Congress and other Washington power-centers that could derail forward momentum. One indicator of the changed environment resulting from Helsinki is the renewed bipartisan push to strip Trump of intelligence powers through Marco Rubio’s DETER Act, which would trigger sanctions in case of further “interference” in U.S. elections.

After kicking the hornet’s nest of domestic loathing for his admiration of Putin – easily the most maligned foreign figure in Western media — Trump will find it difficult, if not impossible, to reach an accord with lawmakers over an easing of ties with Moscow. Instead, his congressional allies will double-down on tough anti-Russia measures rather than affecting a fundamental change in bilateral relations.

In the long run, what little breathing-room Trump had to formulate a new Russia policy — and barely any such room existed – has been rendered toxic by his shambolic approach to the rules of imperialist statecraft and an utter failure to coordinate his “strategy” with the rest of Washington.