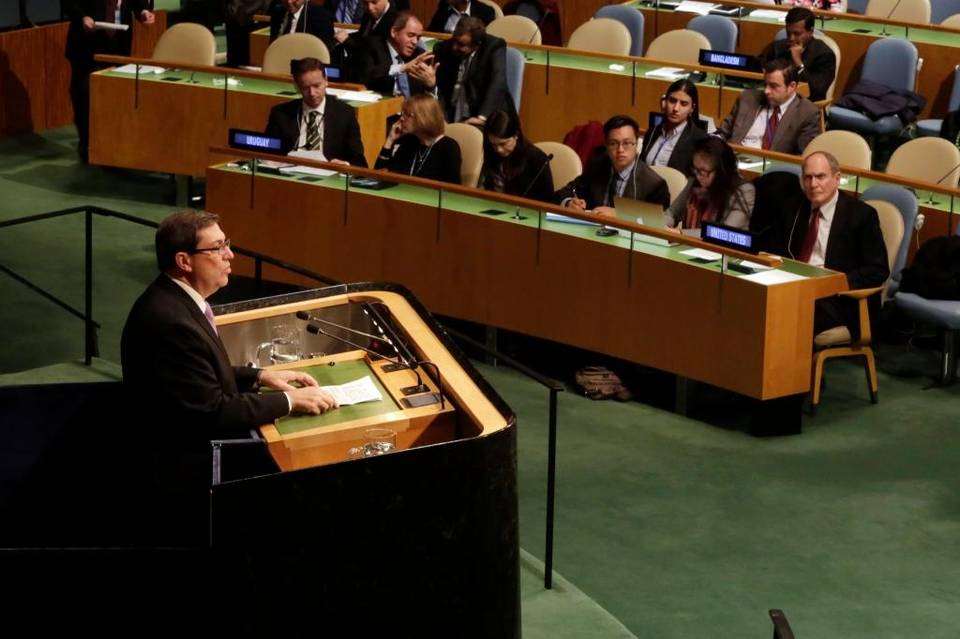 United Nations Votes 191-2 To Condemn US Embargo Against Cuba

The two ‘no’ votes came from the United States and Israel, which almost always has voted with the U.S. on this issue.

In the first United Nations vote on a resolution condemning the U.S. embargo against Cuba since the two countries renewed diplomatic ties in July, Cuba scored its biggest victory yet as the General Assembly voted 191-2 to adopt the resolution.

The only drama was how the United States would vote after its Dec. 17 announcement of a rapprochement with Cuba and its renewal of diplomatic relations with Havana in July after a gap of more than 54 years.

In explaining its “no” vote, the United States said that it couldn’t support the resolution because “the text falls short of reflecting the significant steps that have been taken and the spirit of engagement President [Barack] Obama has championed.” The other no vote came from Israel, which has consistently voted with its ally on this issue.

“If Cuba thinks this exercise will help move things forward in the direction both governments have indicated they wish, it is mistaken,” Ambassador Ronald D. Godard, U.S. senior area adviser for Western Hemisphere Affairs, said at the General Assembly.

Despite demonstrated progress in the relationship, Godard said, the United States “finds it unfortunate” the Cuban government has chosen to introduce a resolution “nearly identical” to those of years past.

The United States had to balance its developing relationship with Cuba and the president’s position that he wants to work with Congress to get the embargo lifted against an awkward and unprecedented stance of not standing in opposition to a resolution contrary to U.S. law.

Comments by Godard and Cuban Foreign Minister Bruno Rodríguez also reflect a split in how the two countries view their evolving relationship.

In his remarks, Rodríguez did acknowledge the new relationship with the United States and the president’s repeated calls to Congress to begin the process of lifting the blockade, the Cuban term for the embargo.

But he said “the facts make crystal clear” that the blockade is still being fully and completely applied.

The new rules on Cuban trade and travel, undertaken by Obama using his executive authority, are positive, said Rodríguez, but they “only modify in a very limited way some elements of the implementation of the blockade. Many of them can’t be implemented unless others are adopted that finally would permit Cuba to freely import and exports goods and services to and from the United States.”

The problem isn’t, as some U.S. officials have suggested, that Cuba’s system thwarts the new trade opportunities and changes need to be made, he said, but rather that the embargo continues to exist.

U.S. Ambassador Ronald Godard addresses the United Nations General Assembly before a vote, Tuesday, Oct. 27, 2015. Cuba will submit to the UN General Assembly on Tuesday its annual draft resolution calling for an end to the U.S.-led five-decade embargo against the Caribbean nation. (AP Photo/Richard Drew)

“The human damage it has caused is inestimable,” Rodríguez said.

“The Obama Administration is caught between history. They want to lift the embargo, but they cannot ignore the law of the land. Secondly, the language of these resolutions is not conducive for the U.S. to vote in favor,” said Miami lawyer Augusto Maxwell who heads Akerman Senterfitt’s Cuba practice. “Law and policy can tie people up in votes.”

The vote has become an autumn ritual at the United Nations. Last year for the 23rd year in a row, the international body overwhelmingly passed the resolution condemning the U.S. embargo against the island by a vote of 188 to 2. Again, the United States and Israel were the only nations to vote against the resolution.

This year the three changed their votes to favor the resolution, giving Cuba its largest victory margin ever.

South Florida Republican Rep. Ileana Ros-Lehtinen condemned the U.N. vote, saying “once again, the United Nations General Assembly falls in line to support the brutal Castro dictatorship while ignoring the plight of the people of Cuba….. This institution is not interested in the democratic rights or freedoms of those living under repressive regimes.”

Many speakers during the debate on the resolution acknowledged the renewal of diplomatic ties between the United States and Cuba and the island’s removal from the U.S. list of state sponsors of terrorism. They said they welcomed the actions.

But some speakers said the steps taken by the United States were still limited and that the embargo remained unchanged or had even been tightened since the historic rapprochement was announced.

María Emma Mejía Vélez, Colombia’s permanent representative, said her country was optimistic that Obama’s “political will” to work with Congress to lift the embargo will serve as a basis for its end. But she said, “The embargo runs counter to international law.”

Speaking on behalf of the Caribbean Community, Courtenay Rattray, the permanent representative of Jamaica, noted that “Cuba is the most popular state of the Caribbean.” He said the embargo wasn’t only punitive against Cuba, “but an impediment to our shared regional development.”

In the U.N. Secretary General’s report on the embargo, Cuba puts a price tag of $833.75 billion for accumulated damages caused by more than a half-century of the U.S. policy of economically isolating Cuba. Taking into account the declining value of gold against the dollar, the economic toll would still be $121.2 billion, according to the Cubans.

That figure not only includes the cost of Cuba not being able to sell its products in the largest market in the world, but also the additional cost of dealing with more distant markets, and commercial losses in trade with other nations fearful of running afoul of U.S. sanctions against Cuba.

Despite the new relationship with the United States, Cuba contends there has been an intensification of the financial and extraterritorial aspects of the embargo, including billions of dollars in fines against third-country banks and financial institutions for using the U.S. dollar in transactions with Cuba.

Rodríguez said that just last week France’s Credit Agricole agreed to pay a fine of $1.1 billion to settle allegations it handled billions of dollars in transactions with Cuba — and other sanctioned countries. He also said that Sprint’s first payment after launching direct service between the United States and Cuba was held up.

Sarah Stephens, executive director of the Center for Democracy in the Americas, noted that the resolution written by Cuba this year did acknowledge that “U.S. policy has changed and the trajectory of the U.S.-Cuba relationship is heading in a new, more positive direction.”

She said the no vote by the United States “is essentially a hiccup; it reminds us of the ongoing damage done to Cuba and the U.S. by keeping the embargo in place, but it also tells us that the future is about diplomatic recognition and engagement.”

But Ric Herrera, executive director of Cuba Now, which advocates for normalization of U.S.-Cuba relations, said the U.N. vote “represents another missed opportunity to build momentum toward normalized U.S.-Cuba relations.” He said the vote would have been historic and more significant if the United States had chosen to abstain.