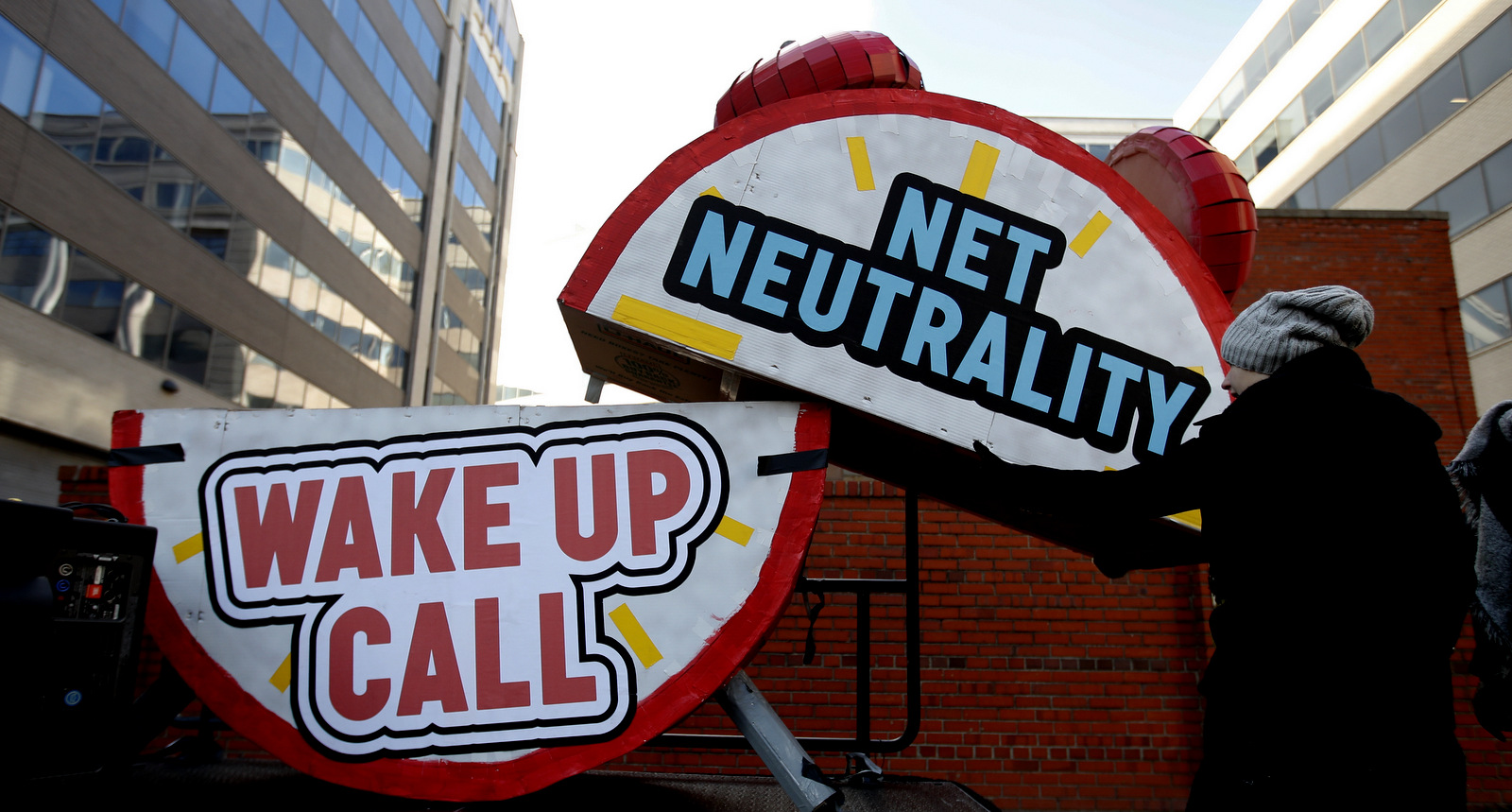 The Next Stage of the Net Neutrality Fight has Begun

On Thursday, the FCC’s net neutrality rule was published in the Federal Register. This was the official start of the next phase of the campaign to protect the open Internet as a common carrier with equal access for all and without prejudice based on content (net neutrality).

There are multiple fronts of struggle to make net neutrality a reality: Congress, the courts, states and communities. This is part of a campaign to create an Internet for the 21st Century that is fast, reliable and available in all communities.

Polls show widespread support for net neutrality. Last year, polling found 77% of people in the United States “support keeping the net neutrality rules, which are already in place” and 87% agree that “people should be able to access any websites they want on the internet, without any blocking, slowing down, or throttling by their internet service providers.” The FCC’s net neutrality rule does the opposite of the national consensus, and if members of Congress want support from Internet users, they need to reverse the FCC’s rule.

Under the Congressional Review Act (CRA), Congress can reject a federal agency’s decision. The net neutrality movement has 60 legislative days to push Congress to reverse the FCC’s order and return net neutrality rules that reclassified the Internet under Title II of the Federal Communications Act. Title II classification ensured the Internet was a common carrier with equal access for all. The movement is working in both bodies of Congress to put elected officials on record for their positions so they can be held accountable.

Net neutrality proponents have been organizing for a Resolution of Disapproval under the CRA since the FCC announced its decision last December. There are already enough co-sponsors to ensure a vote in the Senate, but we are one vote away from victory. Right now all Senate Democrats, both independents, Senators Bernie Sanders (VT) and Angus King (ME), and one Republican, Susan Collins (ME), have agreed to vote for the resolution. This has the Senate in a tie, which would be broken by Vice President Mike Pence.  There are several possible Republicans, e.g.  Sen. John Kennedy (LA), Sen. Lisa Murkowski (AK), Sen. Dean Heller (NV), Sen. Dan Sullivan (AK), Sen. Cory Gardner (CO), and Sen. John McCain (AZ), who might join Collins in opposing the FCC rule.

The Internet Service Providers’ position is being advocated for by the right-wing group, Freedom Works, who defends the FCC’s repeal of net neutrality. They will be holding a day of action on Monday. They are taking the CRA challenge seriously and can no longer ignore us.

There has also been organizing in the US House of Representatives. On January 16, Representative Mike Doyle (PA-14) unveiled the names of 82 original cosponsors of his CRA resolution. Including Doyle, the list totals 83 and includes House Minority Leader Nancy Pelosi. A majority of House members are needed to move forward.

This movement intends to make net neutrality an issue in the 2018 election. Republicans, in particular, are worried about a Trump-caused election against them, resulting in large numbers of retirements. Voters across the political spectrum support net neutrality. Republicans need to join the national consensus or pay a political price.

After we succeed in both Chambers, President Trump will need to decide if he is with the people or the telecoms. If we are successful in both Houses of Congress, we will have built a lot of political power that will be dangerous for Trump to ignore.

Net Neutrality in the Courts

The publication of the FCC rule repealing net neutrality also restarts litigation to challenge the FCC rule, which seeks an injunction to stop the rule from being implemented. State attorneys general, public interest groups and internet companies are all taking legal action in the US Court of Appeals for the DC Circuit. The goal is for the FCC rule to be remanded for reconsideration and for it to be enjoined pending the outcome of the litigation. Courts tend to favor federal agencies, but we have a strong case.

The central arguments will be that the FCC’s action was arbitrary and capricious and abuse of their discretion by reversing net neutrality rules. Further, the FCC misinterpreted and disregarded critical evidence on industry practices, and their decision will harm consumers and businesses. In addition, the procedures followed by the FCC violated the Administrative Procedures Act.

Over the next ten days, lawsuits will be filed by several net neutrality advocacy groups. Those that have filed or pledged to do so include Free Press, Public Knowledge and the Open Technology Institute. In addition, 22 states and the District of Columbia have refiled their lawsuits against the FCC to restore its original rules. Mozilla and Vimeo have also filed suit to protect net neutrality.

Massachusetts Attorney General Maura Healey responds to a question as she testifies before a legislative panel hearing as it considers how Massachusetts might respond after the Federal Communications Commission repealed net neutrality rules at the Massachusetts Statehouse, Feb. 6, 2018, in Boston. (AP/Stephan Savoia)

In California, Hawaii, New York, Montana and Vermont legislation is in the works that would preserve internet neutrality. The FCC’s new rule says states are not allowed to pass their own net neutrality laws, but many are trying to do so with various legal workarounds. It is likely these state and local actions will require litigation to be put into place.

Governors are also working to protect net neutrality. The first governor to act was Montana’s Steve Bullock. Now governors in Vermont, Hawaii, New Jersey and New York have signed executive orders requiring their states to only do business with internet providers that abide by net neutrality rules.

And there is activity at the community level. A new map from Community Networks shows that more communities than ever are building their own broadband networks to end big telecom’s monopoly. They range from large networks in Chattanooga, Tennessee to small town networks connecting a few local businesses. The map includes more than 750 communities as of January 2018, including 55 publicly-owned municipal networks serving 108 communities, 76 communities with publicly-owned cable networks reaching most or all of the community, and 258 communities served by rural electric cooperatives, among others. Nineteen states have barriers in place that discourage or prevent local communities from creating publicly-owned local networks.

People Will Ensure the Internet Serves Us All Equally

Diane Tepfer holds a sign with an image of Federal Communications Commission (FCC) Chairman Ajit Pai as the «Grinch who Stole the Internet» as she protests near the FCC, in Washington, Dec. 14, 2017. (AP/Carolyn Kaster)

The paths we are on in the courts, Congress and the states are challenging, but every step this campaign takes builds the political power of the Internet equality movement. The Internet movement is never going to give up on its demand for net neutrality, as well as related issues of equal access to high-quality broadband for all, no matter your level of wealth or income.

As we discussed in our radio show (listen below) with two top experts on Internet issues, the failure to treat the Internet as a common carrier violates legal principles going back before the founding of the United States. The ideas that the mail was a common carrier or that public transit treated everyone equally are the root concepts of net neutrality. We need to continue to build power to ensure Internet access is seen as a human right and a tool of free speech with equal access for all.

Top Photo | Sammi LeMaster helps to dismantle a large alarm clock display that reads «Net Neutrality Wake Up Call» from the stage after a protest at the Federal Communications Commission (FCC) in Washington, Dec. 14, 2017, where the FCC met to vote on net neutrality. (AP/Carolyn Kaster)

Kevin Zeese, JD is an organizer of Popular Resistance and co-directs Its Our Economy. He is an attorney who has been a political activist since graduating from George Washington Law School in 1980.

Margaret Flowers, MD co-director of Its Our Economy, is a Maryland pediatrician. She left practice in 2007 to advocate full-time for a single-payer health care system at both the state and national levels.