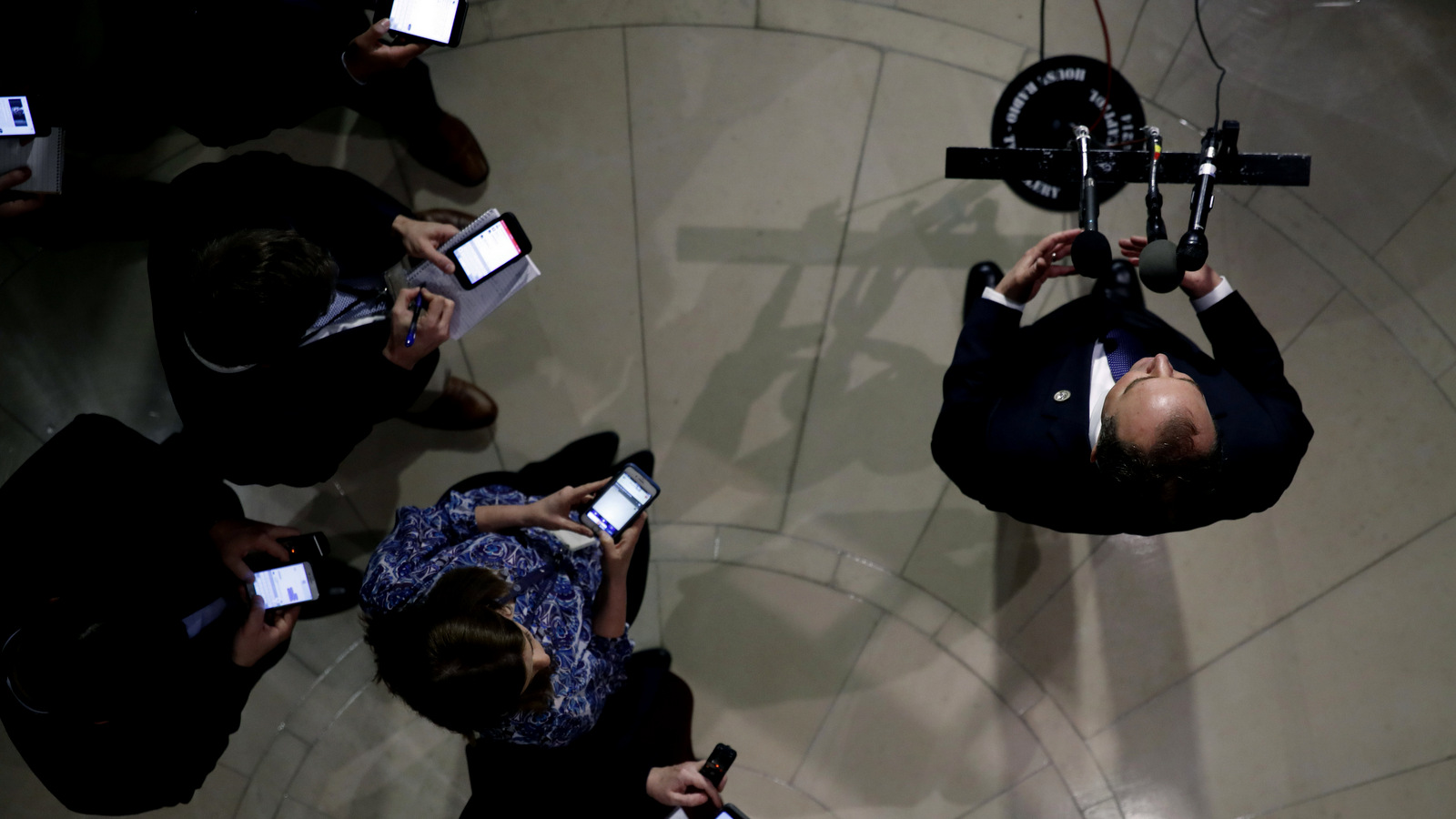 The Untold Story: Russiagate and the Media’s Authoritarian Turn

Through the window she saw soldiers leading groups of men from the little whitewashed church — blindfolded men whose hands were bound behind them. Each pair of soldiers led five or six men past the house of Alfredo Márquez and took them out of the hamlet in various directions. After a time, she saw her husband in one group, and as she watched, along with young Cristino, who had climbed up next to her, eager to see what was happening, they both saw him — Domingo Claros, twenty-nine-year-old woodcutter, husband of Rufina and father of Cristino, Maria Dolores, Marta Lilián, and María Isabel — bolt forward, together with another man, in a desperate effort to escape the soldiers.

But there was nowhere to run. The men of the Atlacatl leveled their M16s and brought both men down with short bursts of fire. Then the soldiers strode forward to where the men lay gasping on the ground, and, unsheathing their machetes, they bent over them, grasped their hair, jerked their heads back sharply, and beheaded them with strong blows to the backs of their necks.”

Washington’s bipartisan Cold Warriors supported the counterinsurgency efforts of El Salvador’s reactionary government, which had for years denied that any such massacre of civilians had occurred. Then in 1992, an international team of forensic experts traveled to the remote village known as El Mozote.

Finally, in October, the experts began to dig. And there, on the third day, in the silence of the ruined hamlet of El Mozote, all the words and claims and counterclaims that had been loudly made for eleven years abruptly gave way before the mute force of material fact. The bones were there, the cartridges were there; the sleeping reality of El Mozote had finally been awoken.”

In newsrooms and journalism schools across the nation, Danner’s New Yorker account of the slaughter in Central America was widely anointed the gold-standard for foreign reportage, his finely-wrought narrative summoning as expert witnesses El Mozote’s survivors, and its martyrs, and even the blood-stained soil to testify in the people’s prosecution of the U.S. government for depraved indifference. 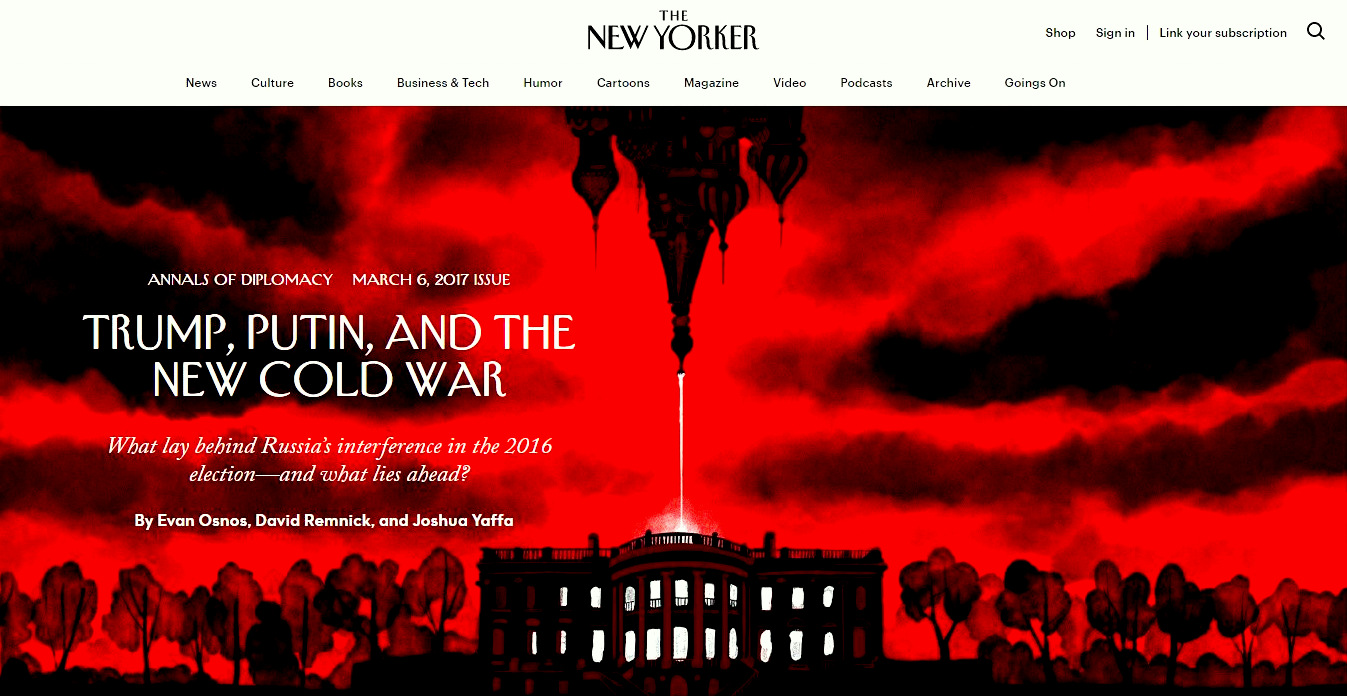 In its March 6, 2017 edition, the New Yorker revisited the subject of the Cold War, but the magazine’s litigation on this occasion couldn’t have been more different from Danner’s. While the El Mozote expose was equal parts Beowulf and Blues ballad, the more recent article — entitled “Trump, Putin, and the New Cold War,” and written by the magazine’s Washington correspondent, Evan Osnos; its Moscow correspondent, Joshua Yaffa; and its top editor, David Remnick — was formless, didactic, and bloodless. It read more like a dossier or a classroom lecture delivered by a supercilious university professor.

Whereas Danner connected the dots to create a seamless, coherent and detailed image of a battlefield and its aftermath, Osnos, Yaffa and Remnick merely hurled disjointed anecdotes against a chalkboard and left them dangling there like an abstract painting. Compare, as one example, this passage with Danner’s prose quoted above:

The 2016 Presidential campaign in the United States was of keen interest to Putin. He loathed Obama, who had applied economic sanctions against Putin’s cronies after the annexation of Crimea and the invasion of eastern Ukraine. (Russian state television derided Obama as ‘weak,’ ‘uncivilized,’ and a ‘eunuch.’) Clinton, in Putin’s view, was worse — the embodiment of the liberal interventionist strain of U.S. foreign policy, more hawkish than Obama, and an obstacle to ending sanctions and reëstablishing Russian geopolitical influence.

At the same time, Putin deftly flattered Trump, who was uncommonly positive in his statements about Putin’s strength and effectiveness as a leader. As early as 2007, Trump declared that Putin was ‘doing a great job in rebuilding the image of Russia and also rebuilding Russia period.’ In 2013, before visiting Moscow for the Miss Universe pageant, Trump wondered, in a tweet, if he would meet Putin, and, ‘if so, will he become my new best friend?’ During the Presidential campaign, Trump delighted in saying that Putin was a superior leader who had turned the Obama administration into a laughingstock.”

The scandal known as “Russiagate” — to paraphrase one economist’s description of the dole — represents the “breakdown of all systems,” but none so much as American journalism. If Danner’s effort is a triumph of storytelling, and a textbook example of reportage that strengthens democratic debate by shining a light on the ordinary people who are most affected by government policies, then the 2017 New Yorker polemic is an attempt at hypnosis, and so heavily invested in amplifying the voices of the powerful that it borders on authoritarianism.

No skulls, perhaps some bots and bytes People need stories to deepen our understanding of each other and the world we live in. Everyone — from car salesmen to trial attorneys to wedding planners to labor reps — relies on compelling narratives to connect to their audience and ply their trade. And yet, you can sift through the mainstream media’s breathless Russiagate coverage, read every edition of the New Yorker or The New York Times, review every Rachel Maddow segment, and ruminate over every National Public Radio interview, and what you most surely will not find is a narrative account of Putin’s meddling in the 2016 presidential election that in any way, shape or form resembles Danner’s reportage on the atrocity at El Mozote.

In fact, the 2017 article by Osnos, Yaffa and Remnick — who won a Pulitzer Prize for his 1993 book on the breakup of the Soviet Union — violates a cardinal rule of the craft, which is likely taught in every freshman news writing course.

Had the 2017 New Yorker expose followed this dictum, we could imagine that it might’ve read something like this:

Putin loathed Obama, and Clinton even more for what he saw as her preening hawkishness. As he watched her deliver her acceptance speech at the Democratic National Convention, he glared at the television monitor in his office sitting area, seething, one observer would say later, in silence. Finally, when Clinton had finished her address, there was a long, pregnant pause of nearly 30 seconds followed by Putin — his tie loosened, shirtsleeves rolled up, tumbler of vodka in hand — turning to his top intelligence officer and all but spitting at him: “‘Well, what do you intend to do about this?’”

Instead, the article read thus:

Certainly no one can say definitively whether Russia colluded with Trump in an effort to influence the 2016 election, but what can be said definitively is that the media has not, to date, offered a credible narrative of either how, or why, this interference occurred. This critique is not some journalistic conceit, or a preoccupation with stylistic banalities but a critical issue that raises questions about the substance of Russiagate’s principal assertions.

Storytelling is to journalism what proof is to pudding. Consider that the key to weaving together a narrative of high-crimes and misdemeanors committed by the Nixon Administration was the Washington Post’s intrepid reporting. Carl Bernstein and Bob Woodward interviewed a bookkeeper, among others, to challenge the official version of the Watergate break-in proffered by high-ranking political operatives and government officials who were the James Clappers of their day. Conversely, the media’s depiction of Iraqi ambushers sexually abusing U.S. Army Pfc. Jessica Lynch after she had fought valiantly was contradicted by deeper reportage which showed committed Iraqi doctors who were keenly aware of the West’s caricature of Arab men as sexually menacing.

In fact, the mainstream media’s handling of Russiagate is reminiscent of the defense attorney who wins an acquittal for police officers caught on video needlessly brutalizing a motorist: by showing the video frame-by-frame, the strategy has the effect of deconstructing the narrative, and unplugging jurors capacity for empathy and understanding. In a law review article for Boston College, the legal scholar Mark Brodin said that prosecutors in Florida bungled the Trayvon Martin case by  “committing] the most inexplicable strategic and evidentiary blunders of a type that experienced prosecutors would very likely not commit in a more earnest [writer’s emphasis] effort to convict.”

Of the prosecution’s many missteps, Brodin wrote that the most damning might’ve been the failure to “to convey to the trial jury this simple narrative of racial profiling and stalking by a vigilante not acting under color of law.”

A scarcity of evidence A House Committee questions attorney’s from Google, Twitter and Facebook about Russian ads during a hearing on Capitol Hill, Nov. 1, 2017. (AP/Manuel Balce Ceneta)

In the Russiagate scandal, the strongest evidence supports an alternative narrative that few mainstream journalists have interrogated. First, a forensic audit by former CIA agents concluded that the Democratic National Committee servers that were the source of the damning internal emails from Hillary Clinton’s top campaign staffers were not hacked; rather, the more likely scenario is that a DNC staffer downloaded the emails and passed them on to WikiLeaks founder Julian Assange.

Similarly, there is no evidence that the WikiLeaks disclosures or the social media posts allegedly intended to undermine support for Clinton had any effect on the election. What almost certainly did was low turnout by Democratic voters, especially African-Americans, who express widespread disillusionment with the power couple’s policies dating back to their time in the White House.

Clinton inexplicably didn’t make a single stop in Wisconsin during the general election campaign, and won voters under the age of 30 by a mere four points, or 10 percentage points less than did Obama four years earlier. The state voted Republican for the first time since 1984. And in the majority black city of Detroit, which is typically a bellwether for the state, Clinton won roughly 50,000 fewer votes than Obama did in 2012.

Said Democratic pollster Paul Maslin to the Detroit Free Press the day after the election:

It’s is nothing short of malpractice that her campaign didn’t look at the Electoral College and put substantial resources in states like Michigan and Wisconsin.”

The New Yorker continues to produce quality narrative journalism, such as its investigation into the New York Police Department’s firing of a Muslim police officer and its investigation of Harvey Weinstein’s sexual predation. But all too often, the New Yorker, like most mainstream media outlets, seeks to either qualify or ignore exploitation and injustice. Consider, for example, this article defending the displacement of poor blacks following Hurricane Katrina, in which the writer’s decision to profile a vacationing sociologist rather than an African American forced to relocate reflects a subtle – and yet seismic – shift in how journalists go about their work and suggests perhaps a change in objectives as well.

By narrating the experience of a remote Salvadoran village, Danner articulated his faith in the American people to make the right decisions if only we were granted access to the bitter truths of others, sometimes in distant lands.The New Yorker’s Russiagate story, however, is cynical, even arrogant, in its insistence that the journalist knows better than the rest of us, if only because he or she has access to the elites who populate a corrupt political class.