Attention deficit disorder isn’t usually a welcome presidential attribute, but Mexicans can be thankful that Donald Trump has temporarily shifted his focus away from their country to start fights instead with Iran, the European Union, China, California and the U.S. news media.

The last time Trump addressed Mexico, right after the election, the peso fell 17 percent. Within days of his inauguration, Trump demanded that Mexico pay for a border wall, prompting cancellation of his planned summit meeting with Mexican President Enrique Pena Nieto.

Someday soon, however, Trump will rediscover his interest in Mexico, and relations will likely suffer again. But Mexico need not take his abuse lying down. As the buyer of more than a quarter trillion dollars in U.S. exports — the second-largest market in the world for U.S. goods — Mexico has some leverage if Trump tries to play rough with tariffs and trade.

And if Trump persists in sending a bill to Mexico City for his wall, Pena should seriously consider sending a bill in return to Washington to pay for the U.S. drug war. Ezequiel Mora, father of Alexander Mora, one of 43 college students missing since September whose body has now been positively identified among charred remains found near a garbage dump, stands next to an altar in his son’s memory, at their home in the town of El Pericon, Mexico, Sunday Dec. 7, 2014. A family member of another missing student told The Associated Press that the remains were of Alexander Mora. The families were given that information late Friday by an Argentine team of forensic experts working on behalf of the relatives and with the Attorney General’s Office.

For years now, Mexico has paid an extraordinarily high price in lives and social disruption for Washington’s insistence that North America’s drug problem be tackled south of the border, where the drugs are grown and transported, rather than primarily in clinics and halfway houses at home to treat the medical and psychological issues of users.

Forcing that trade underground has taken a terrible toll on Mexico in terms of violence, corruption and social upheaval. Since 2006, when President Felipe Calderón ordered his military to join the “war” on drug traffickers, Mexico has lost about 200,000 lives and 30,000 more have disappeared, dwarfing the civilian death toll in Afghanistan and Iraq over that period.Successive administrations, starting with President Nixon, have demanded ever-tougher border controls, aerial-spraying programs, and DEA-backed anti-“cartel” operations in Mexico. All those efforts and sacrifices have been for naught. U.S. residents currently export up to $29 billion in cash to Mexican traffickers each year to buy marijuana, cocaine, methamphetamines and heroin.

The majority of those killed and disappeared were victims of criminal organizations, but human rights organizations also report soaring rates of human rights violations, including torture and killing, committed by security forces.

The 2016 Global Peace Index, prepared by the Institute for Economics and Peace, estimates the total cost of violence in Mexico at $273 billion, or 14 percent of GDP, with no end in sight. Direct fiscal costs of fighting the war on crime were about $32 billion in 2015 alone. Yet the United States has contributed only about $2.5 billion since fiscal 2008 to Mexico’s drug war, under the so-called “Merida Initiative.”

Mexico’s pain shows no signs of easing. The New York Times reported in December that Mexico suffered more than 17,000 homicides in the first 10 months of last year, the highest total since 2012.

“The relapse in security has unnerved Mexico and led many to wonder whether the country is on the brink of a bloody, all-out war between criminal groups,” it said.

Time for an Alternative 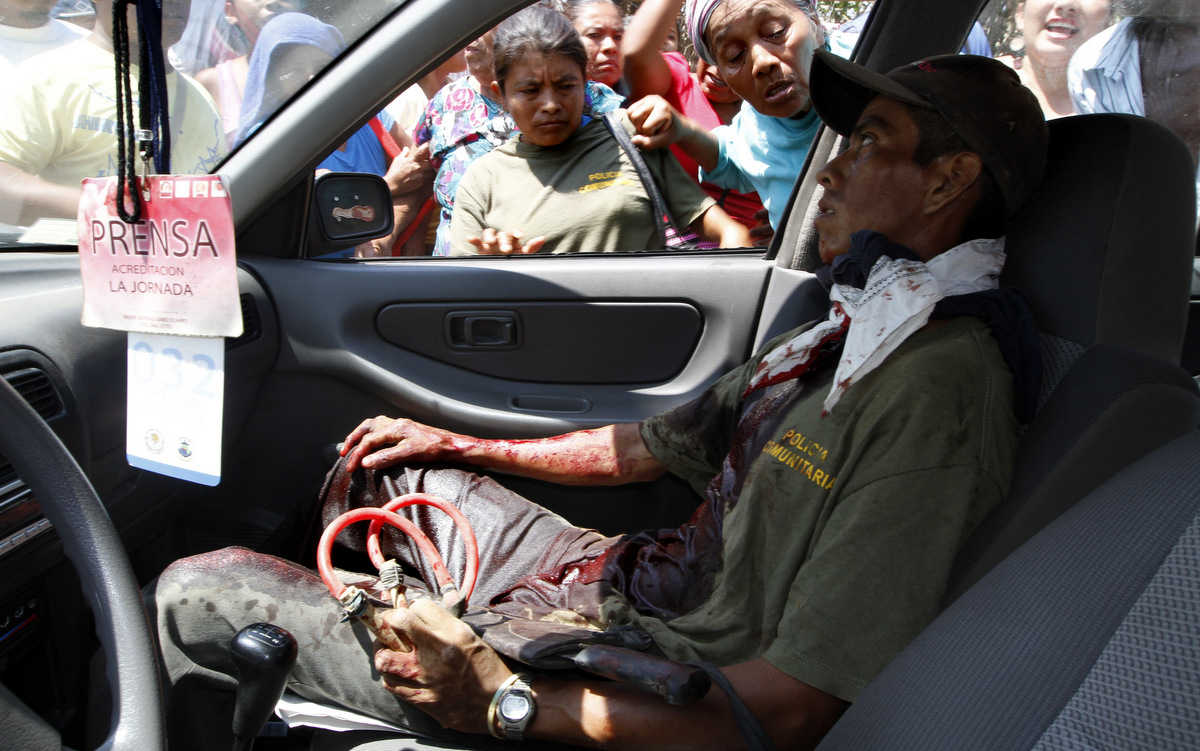 Villagers watch injured community policeman, Lorenzo Angel, 22, holds a slingshot while being taken in a journalist’s vehicle to be treated, after gunmen ambushed a group of community policemen Angel was with, in the town of La Concepcion, Mexico, Friday, April 4, 2014. (AP/Bernandino Hernandez)

In his last phone call with Mexican President Pena, Trump reportedly complained, “You have some pretty tough hombres in Mexico that you may need help with. We are willing to help with that big-league, but they have to be knocked out and you have not done a good job knocking them out.”

Pena can continue to do Washington’s bidding, ensuring his political demise, or he can challenge Trump by asking why Mexico should fight North America’s drug war on its own soil and at its own expense. If he goes the latter route, he’ll have plenty of good company.According to one disputed account, Trump threatened to send U.S. troops south of the border if Mexico doesn’t do more to stop the drug problem.

Former heads of state from Brazil, Colombia and Mexico, along with other distinguished members of the Global Commission on Drug Policy, have called for “normalization” of drugs — eliminating black markets and incentives for violence by legalizing individual possession and cultivation of drugs while instituting public health regulations. They note that such programs have succeeded admirably in Portugal and the Netherlands at reducing both the criminal and public health costs of drug abuse.

“The harms created through implementing punitive drug laws cannot be overstated when it comes to both their severity and scope,” the former heads of state assert in their 2016 report, “Advancing Drug Policy Reform.”

“Thus, we need new approaches that uphold the principles of human dignity, the right to privacy and the rule of law, and recognize that people will always use drugs. In order to uphold these principles all penalties — both criminal and civil — must be abolished for the possession of drugs for personal use.” A young man prepares a marijuana joint while holding a Bugs Bunny stuffed animal during a small gathering to demand the legalization of marijuana in Mexico City, (AP/Dario Lopez-Mills)

Support for decriminalization is growing in Mexico, where the Supreme Court in 2015 approved growing and smoking marijuana for personal use. Former Mexican President Vicente Fox now advocates legalizing all drugs over a transition period of up to a decade.

Jorge Castaneda, a former Mexican foreign minister, recently opined, “Mexico should take advantage of California’s decision to legalize recreational marijuana. Regardless of Mr. Trump’s victory, the approval of the proposition in the United States’ most populous state makes Mexico’s war on drugs ridiculous. What is the purpose of sending Mexican soldiers to burn fields, search trucks and look for narco-tunnels if, once our marijuana makes it into California, it can be sold at the local 7-Eleven?”

Critics rightly point out that what works in the Netherlands won’t necessarily solve Mexico’s problems. Its powerful drug gangs have diversified into a host of other violent criminal enterprises. They control territory, intimidate or corrupt law enforcement, and kill with impunity.

Legalizing drug sales won’t end their criminal ways, but it could erode their profits and let police focus on universally despised crimes with direct victims — murder, kidnapping, extortion and the like.

As Mexican journalist José Luis Pardo Veiras remarked last year, “Decriminalizing drug use will not fix a deeply rooted problem in this country, but it will allow Mexicans to differentiate between drugs and the war on drugs, between drug users and drug traffickers. This is the first step in acknowledging that a different approach is possible.”

As for Trump, let him build his wall and see if that keeps out all the drugs. If not, maybe by then Mexico will be able to offer some useful advice on how to fight the drug problem not with guns, but with more enlightened policies.

Jonathan Marshall is author of many recent articles on arms issues, including “How World War III Could Start,” “NATO’s ProvocativeAnti-Russian Moves,” “Escalations in a New Cold War,” “Ticking Closer to Midnight,” and “Turkey’s Nukes: A Sum of All Fears.”